When I first got back into wargaming and modelling around 2002 my main interest was WWII, so here are some of the things I was making around that time. I had grand plans to make up some units of the British 7th Armoured Division and German 116th Panzer Division to wargame with, using the 'Panzermarsch!' rules put out by the Hull Wargames Society. This never really happened, but I've been reading Anthony Beevor's latest book on D-Day, and thinking that I might dust off the tanks and try to have a game of something. I've just ordered a copy of the 'Disposable Heroes' WWII skirmish rules to try out.
The tanks are Revell Cromwells. Lovely kits, but a real pain putting together all the individual links in the tracks. I wish HaT had put out their Armourfast Cromwells at the time I was making these. 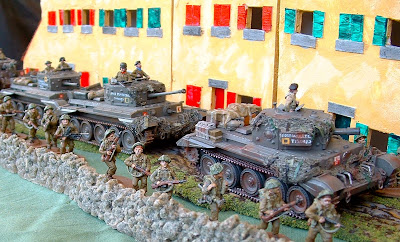 The lead tank is a Centaur, made with a resin conversion kit from Leva Productions on a Revell hull. All the crew figures are from AB Figures. 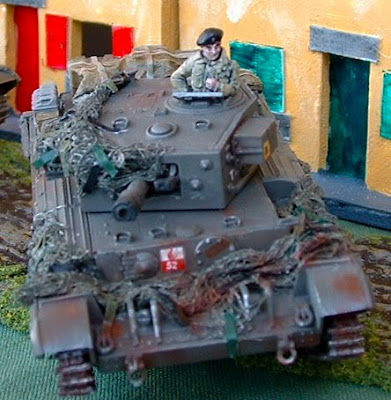 As is my wont, I became obsessive about giving all the tanks the correct names and numbers that were carried by a squadron of the 1st Royal Tank Regiment (from 7th Armoured Division) in Normandy. I found a website that listed all these, but I can't find it any more. But I did find this site -
http://www.armouredacorn.com/
It has some big differences from the list I used, so there you go. 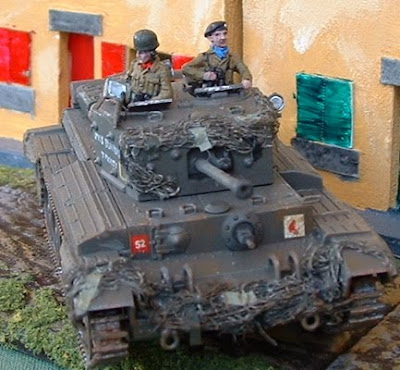 The supporting infantry are from AB Figures, painted up as the Rifle Brigade. If you look closely you may see the green shoulder tallies of and the black and red desert rat shoulder patch of the 7th Armoured Division. I love these AB Figures - incredibly lifelike poses that really look like the photos of British Tommies from 1944-5.
The camo netting was made from gauze bandage, airbrushed olive green. I then draped it around the tanks with liberal amounts of PVA glue. British camo netting had strips of hessian added to it, so I cut thin strips of paper and randomly glued them into the netting, finally painting them either black, dark green or olive.
Tank troops in the 1st RTR were made up of 3 Cromwells with a Sherman Firefly. I left the Fireflies out of these pictures, but will add them at some stage. My favourite Firefly rejoices in the name 'Wherezatiger'.
I don't know what it is about Cromwells, but I think they're great. Boxy. The Volvos of armoured warfare. Of course I never had to face Tigers and Panthers in one, thank god. I'm fascinated by the controversy over British tank design that broke out in Britain after D-Day - David Fletcher's 'Great Tank Scandal" is a good read about why their tanks were so inferior to most German designs. Anyway, I did enjoy meeting a Cromwell in the flesh, as it were, at Bovington Tank Museum. 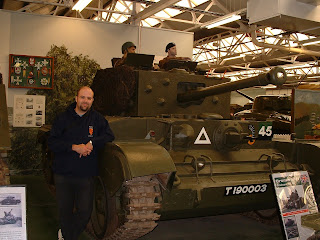 The houses in the background are scratchbuilt from foamcore, but unfinished (especially the awful shutters). I was inspired to make these after coming across the great website belonging to one Nikolas Lloyd (http://www.lloydianaspects.co.uk/). He has some brilliant tips about making wargaming terrain and buildings.
Posted by Dux Homunculorum at 2:55 AM