My latest project is to do some work on my ECW armies. Painting ECW armies in 1/72 scale takes some ingenuity, as it requires mixing some plastic and metal figures, and doing some conversions. For me this is part of the appeal.

DBA-RRR. This is a free supplement to DBA for the 16th-17th centuries designed by Tony Aguilar. I haven’t played it yet but it looks good, and Mr Aguilar has also thoughtfully provided army lists. They are all here: http://www.scribd.com/group/82216-dba-rrr-renaissance-reformation-and-restoration

Lion of the North. I haven’t played these either, but they have some features I like. The sequence of events (move, fire etc) is random, which makes battles less predictable. The rules also avoid some of the backwards-forwards nature of DBA by having units suffer ‘steps’ of damage. They are also free! Find them here:

All my troops are based on elements 5cm wide. Horse are always mounted 2 to a base, and infantry 3 to a base (or 2 if skirmishers). This basing is different to DBR, but since I usually have to provide both armies to have a game it doesn’t matter, and it means less painting.

There are few 1/72 scale plastic or metal figures available for the ECW. Here is a survey of what is available or can be adapted. I’d like to know if there are others I’ve missed. 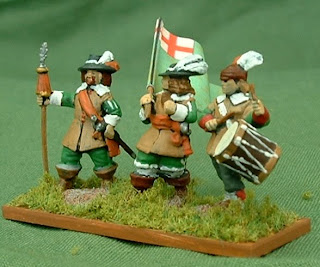 Command figures from A Call to Arms

1. A Call to Arms Parliamentary Infantry

2. A Call to Arms Royalist Infantry

3. A Call to Arms Command Set

See them all reviewed here: http://www.plasticsoldierreview.com/PeriodList.aspx?period=12

When the infantry from all 3 sets are mixed together it is possible to get a good range of figures for an army. In particular, mixing the pikemen from both infantry sets allows the creation of a good pike unit. They are realistic and nicely moulded, but there are a couple of problems. The pikemen are wearing a lot of armour that was steadily abandoned as the wars went on. In particular, the tassets (thigh protectors) worn by all but one of the pikemen would have been increasingly rare by 1645. The musketeers don’t look so great as a group. There are too many figures doing too many different things to really look like they belong together in a drilled unit. Only one figure in any of the sets is using his musket, and he is found in the Command Set.

These are great figures for the Thirty Years War. Unlike A Call to Arms the musketeers look great together. For the ECW they have some problems. The Imperial Infantry are all wearing helmets, which would have been rare for English musketeers. Some aspects of the clothing also look too old fashioned and Continental to be convincing for the ECW. In particular, the baggy breeches (pluderhosen) don’t look right. The musketeers are all using rests, which again became quite outmoded as lighter muskets were introduced during the ECW.

These figures can certainly be mixed in with those from ACTA, and are certainly good for the first year or so of the war, and perhaps for regiments that were drawing on the stocks of old armouries. Some head swapping (eg replacing some helmets with caps from ACTA figures) makes them even better. They would look quite wrong for the New Model Army.

Pikes for both Revell and ACTA should be replaced by wire or broom bristles – the Revell pikes don’t have points and are variable lengths and the ACTA pikes are much too short. Here is a block of pikemen from a 'green' regiment. Figures are a mix of Revell and ACTA, with a couple of Zvezda. 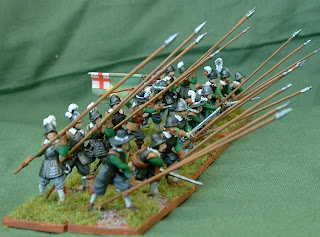 And here is a 'red' regiment. 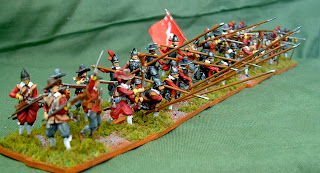 Why Zvezda? Why? These are beautiful figures, look great for the ECW (especially for the early stages), but are much too big for 1/72 scale. They don’t look right mixed with ACTA or Revell figures. I have sneaked a couple of pikemen from the set into my units, but they stand out, and the musketeers would do so even more. The options are either to make your infantry completely from this set, use the figures to make separate regiments, or not use it at all. Damn.

There is lots to dislike about Mars. Most of their sets are pirated versions of figures from Revell and Esci and others, and are often really badly done. That being said, some of these figures may be useful, such as the mounted officers…

Although these figures are really suitable for the period 1688-1746, they may be usable for the army of Montrose, or for Highlanders in Covenanter armies. I haven’t tried this yet, but some figures can probably be adapted by sing a hobby knife to remove any traces of short jackets and paint them as buff coats etc.

There are two main manufacturers that I know of who make metal 1/72 figures for the ECW. These are a great way to add variety to your plastic army and to avoid it looking too much like a Continental 30YW army. In particular, both manufacturers make figures suitable for the New Model Army. SHQ make Covenanter infantry and Tumbling Dice make light cavalry and militia infantry that you can ‘customise’ with different heads. I’m working on a Covenanter army, so I bought a bag full of heads with Scots bonnets.

Not all the metal figures work equally well with the plastics. As you can see from the size comparisons the SHQ Covenanters are a little short – more 1/76 than 1/72. This isn’t so much a problem, but the size of their muskets are quite different to those from Tumbling Dice. I think I will probably end up making my Covenanter army for DBA-RRR from mainly Tumbling Dice figures, with some SHQ and plastics for variety. My Parliamentarian army will be the opposite – mainly plastics with a scattering of metal.

Next time - the cavalry.

Posted by Dux Homunculorum at 2:18 AM