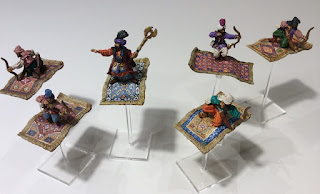 Our gaming group has been loving playing Lion Rampant and Dragon Rampant of late. Dan Mersey has written a cracker of a rules system. I have often been using my Saracens for Lion Rampant - some of which even appear in the rule book - and love the way that a few little subtle rules allow them to fight in a very different way to, say, a western feudal army. For example, the rules for horse archers work very well, often allowing them to avoid contact with the enemy, but suffering badly when they get caught.Indeed, I like Lion Rampant so much that I even broke my usual rule of avoiding fantasy games to play Dragon Rampant with the fine fellows from the club. After one game, I found myself researching which dwarf miniatures I like the most and looking at big dragon models. 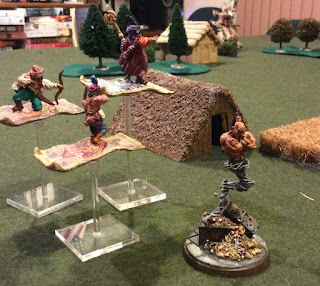 I also bought a handful of figures to turn my Saracens into a fantasy force, with six flying carpet riders from Black Tree Design and a beautiful Djinn mini from Otherworld. They were loads of fun to paint up, and I quite enjoyed hand painting the carpets while listening to the audiobook of 'Look Who's Back'. 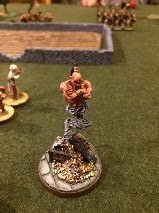 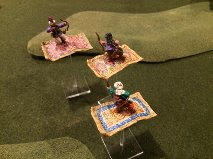 Paul, John and I had a very enjoyable game with my new army, facing off against John's lovely Saracen Orks from Chronopia Miniatures. The flying carpets were lots of fun to use, effectively acting like helicopter gunships as they popped up from behind terrain and showered the Orks with arrows. The Djinn completely failed to cast any spells, but proved his mettle in hand to hand combat. Despite John deploying the Fez of Intimidation I managed a victory and, against all precedent and tradition - failed to lose a single one of my newly painted figures. 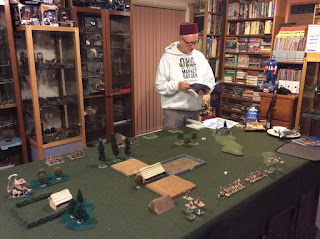 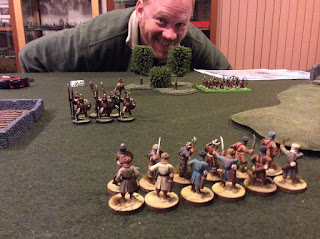 If you haven't given them a go, Lion and Dragon Rampant are great fun games, and I'm eagerly looking forward to The Pikeman's Lament, Dan Mersey's next variant on his solid games engine.
Posted by Dux Homunculorum at 4:13 AM