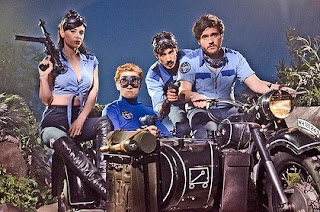 If dinosaur-headed Nazi super soldiers are your thing, you need to know about 'Danger 5', a new TV series made here in Australia on a budget of about $5. Two episodes have aired so far, and they are hilarious. Marvel as apparently 1960s secret agents battle Nazis (and Hitler himself) in a bizarre version of WWII, replete with secret bases under volcanoes and Zeppelins stealing the Eiffel Tower.

Very, very silly. But don't take my word for it, grab yourself a glass of Cinzano and watch it here.
Posted by Dux Homunculorum at 10:12 PM