Putting Nerd Skills to Good Use

Less than a day now until the Painting Challenge begins. I've been pushing hard to get my Wild West terrain finished so that I can his the ground running with the Challenge, but even more important things have intervened with the Mini Duchess turning seven this weekend.

Today I had the pleasant task of making a cake for her party tomorrow, and I think it's fair to say that my modelling skills came in handy. 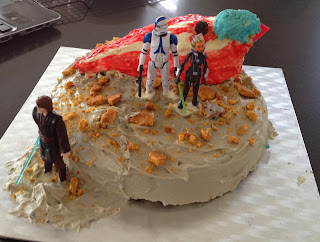 She wanted a cake featuring Ahsoka Tano from The Clone Wars. Ahsoka is one hero of hers I'm very pleased to encourage. When she's playing Ahsoka she is likely to be running around the house clobbering her brother with a lightsaber, which is a huge improvement on her Disney Princess games, which involve her walking slowly around simpering and asking people to marry her.

With some great help from big sister Erica, I tried to make a scene of Ahsoka and friends next to her crashed starfighter on an unfamiliar planet. I'm pretty pleased with the basic look of her ship. Basically I started with a rectangular cake and carved it into delta shape. Then I covered it with melted white chocolate and used a brush to try to paint on coloured icing thinned with lemon juice. This was a bit disappointing, as I really wanted much bolder colours, so I briefly considered reaching for the Vallejo paints until I remembered we're meant to eat the thing. But overall, I reckon it turned out OK, and I'm looking forward o seeing her reaction.
Posted by Dux Homunculorum at 4:07 AM