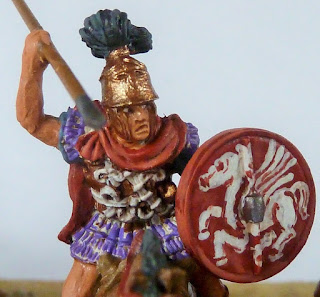 Those of you interested in the Zama Project I'm working on will know that I've been impatiently waiting on the arrival of a shipment of metal figures from Relic Miniatures to flesh out my Roman Republican army, which is mainly made up from Agema plastic figures. A nice heavy box finally arrived, containing some Roman, Numidian and Socii cavalry along with some command figures.

The Roman Cavalry is finished - two units on 12cm X 8cm bases. These mix in pretty well with the Agema plastics. Just a note of caution: if you get figures from Relic pay careful attention to whether they list particular figures as 'true 28mm' or 'heroic'. The 'heroic' standard bearer I bought looks absurdly overscale compared to the others, and even the Numidian cavalry riders are larger than the Romans. My advice is that if you ever consider setting up a miniatures company, set your scale carefully before you start commissioning figures from sculptors so that figures are at least compatible within the same range!

That being said, the Relic Minis that do mix in with Agema scale-wise are quite nice, with similar natural proportions to the plastics. 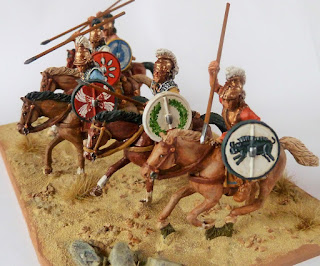 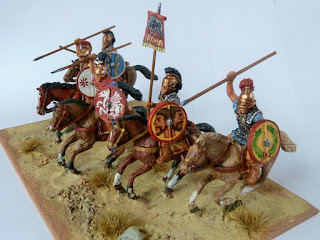 As usual, shields are hand painted, and looking at them now I see I forgot to add some white to Janus' eyes on the shield of the standard bearer. The standard is a conversion, made from foil from a champagne bottle. 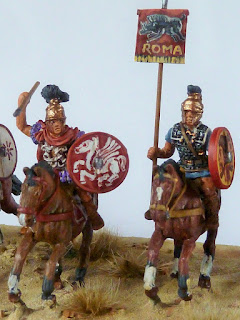 With this cavalry finished, I think I see some light at the end of the Republican Army tunnel. I am looking forward to painting something else, to be honest, but will push on and finish the army. Still to come are four more bases of legionaries, two of Numidian horse, two of allies, one of allied foot, some slingers and a couple more velites.
Posted by Dux Homunculorum at 9:32 PM