'Clubmen' was the name given to locally-organised militias during the English Civil Wars who were usually motivated by the desire to defend their lands against depredations by the armies of either side. For a good summary of the Clubmen uprisings of 1644-6, see: http://www.british-civil-wars.co.uk/glossary/clubmen.htm
The banner is based on the only known flag carried by Clubmen, which was captured by Cromwell's troops on 4 August 1644 in a skirmish at Hambleton Hill, near Shrawton in Dorset. There is no surviving image of the flag, but the motto was recorded. I have guessed at a possible design. 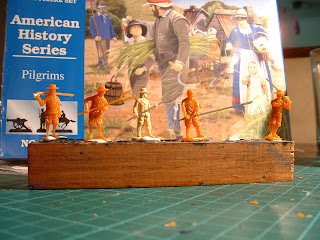 The Clubmen figures are mainly conversions from the Imex set of Pilgrims, with one man wielding a quarterstaff converted from the ACTA Royalist Artillery set. The Imex Pilgrims set has all sorts of interesting conversion possibilities, as Andrew has already pointed out over on his 'Ferrous Lands' blog (http://www.ferrouslands.com/2010/02/painted-imex-pilgrims.html). The only reference I know of to any sort of uniform worn by Clubmen is a reference to a group near Salisbury in 1645 wearing white 'ribbands in their hats' (http://en.wikipedia.org/wiki/Clubmen). However, this was likely just a local distinction, so I have given my figures a mix of hat bands.
Here they are! 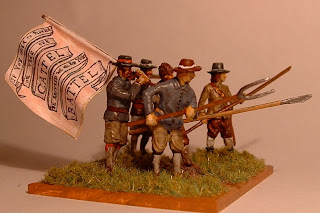 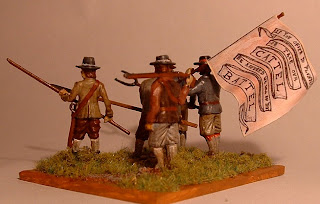 Posted by Dux Homunculorum at 5:29 PM