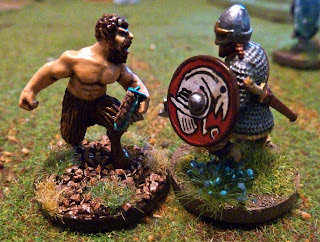 Thanks to the Duchess looking after the kids for the afternoon I had the rare opportunity today to get a couple of games in with Dr Hotspur.

For our first game, we playtested one of the scenarios from Hotspur's upcoming second edition of his Irregular Wars - a fun set of rules for small actions between 1519 and 1641. The scenario we tried out was the 'Reive and Retrieve' game, setting my Lowland Scots on a sheep stealing raid against Hotspur's Royal English. 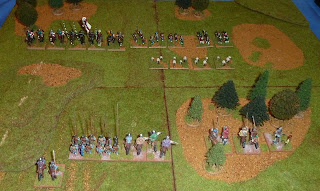 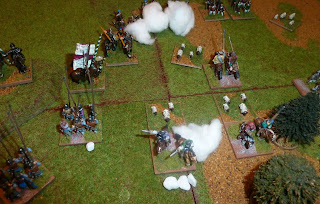 Holding off the English horse on their left flank, the Scots make a grab for the livestock.

The game worked well - particularly well for me! Although my force took heavy losses I managed to drive half the English sheep off my end of the board, leaving the Scots survivors full of mutton and the English looking sheepish. 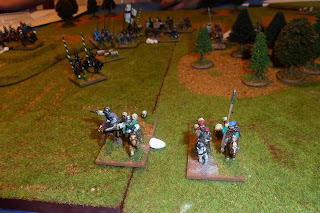 The Scots captain and another company of horse escape with their ovine plunder.

For our second game, we played Song of Blades and Heroes (great game!), setting my Vikings against Pan, a flock of satyrs and a dryad named Phoebe. 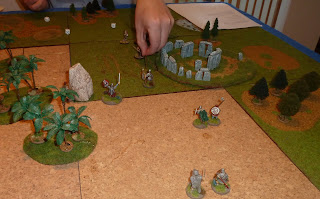 Check out the bizarre terrain!

Although Phoebe scored an early success by entangling one of my warriors and setting him up to be finished off by Pan, my hero Harald the Hard Bastard waded in and sorted her out, rapidly dispatching her with a gruesome kill. This unnerved a couple of the satyrs, who ran away, allowing me to concentrate Harald, a berserker and the rest of my warriors against Pan and a satyr with a strong stomach. 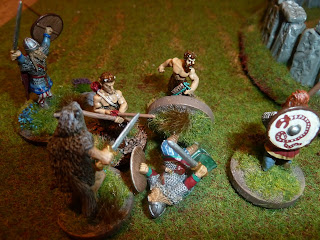 Despite Olaf the Unsteady being knocked over at one point by Pan, pragmatic Norse steel soon prevailed. Of the satyrs who legged it, one returned just in time to get axed, the sight of which again appalled the survivor to the extent that he took to his little goaty heels. I must confess to feeling a certain amount of guilt about the dryad.

Thanks to Hotspur for a fun afternoon, and for designing a great set of rules in Irregular Wars.
Posted by Dux Homunculorum at 2:51 AM