I have a bit of a thing for Churchill tanks. Dunno why - possibly strong childhood memories of my brother making the Airfix Churchill. There is something so reassuringly boxy and British looking about them. When I started thinking about giving my little British force for Bolt Action some support options, it was a no brainer that I would pick up one of Warlord's Bolt Action Churchill Mark VIIs.

So what do you get in the box? The tank is a simple resin and metal kit, made up of five resin parts and a small white metal sprue. The detail of the resin is very crisp, with no air bubbles or casting problems. Here is an image of the assembled tank, along with some stowage I've added to the rear engine deck covered in a tarpaulin made from the foil around the top of a wine bottle. Parenthetically, you realise you are a sad bugger when you start choosing wine based on whether it has the right foil around the cork. 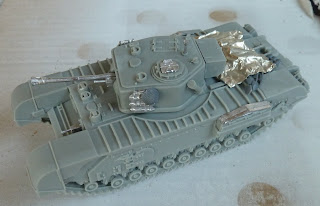 Basically this is a very nice looking kit, but I have a few minor gripes. Firstly, the body of the tank is made up of a central resin piece with the two side pieces with the tracks and running gear. These all fit together with the aid of a couple of big locating lugs. However, when you look at the thing head on, you'll notice that the two sides aren't quite level, so the tank ends up a bit wobbly. Then there seems to be a problem with the mould for the left track section, as part of the towing cable is missing. 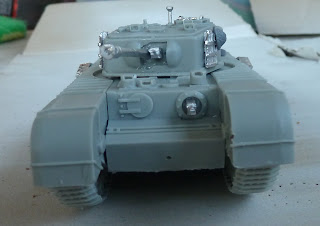 On the central resin hull section there's a hole at the front for the towing hook thingy, but the part isn't supplied. I wasn't that thrilled about some of the white metal parts. In particular, the gun barrel seems to lack a little lug so that it actually fits properly in the turret. I ended up drilling a hole in the barrel and using a pin to attach it.

Does any of this really make me not like the model? Naaah. What I would love though is a whole lot of spare track sections (rather than the two supplied) and some stowage items to busy the thing up.
Posted by Dux Homunculorum at 6:09 AM