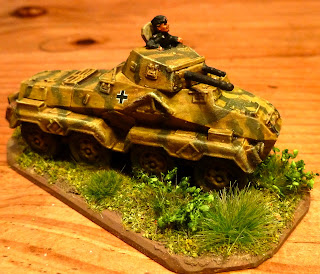 Tomorrow afternoon I'm meeting up with a new gaming buddy for a 500 point game of battle Group Kursk. I've only played little test games so far, so I'm very excited. I'll be fielding a German Panzer battlegroup, and rapidly realised over the weekend that I really needed some reconnaissance assets. Fortunately I had a Flames of War SdKfz 231 (8 Rad) lying around for such an eventuality, so rapidly stuck it together, undercoated it, dropped it on the patio, stuck it together again and got it painted and based.

I'll write up a review of the game, so watch this space.
Posted by Dux Homunculorum at 4:24 AM