Battlegroup Fall of the Reich: What's On My Painting Table

It has been a ridiculous couple of weeks of everyone in the family getting sick and a frantic time at work, so the painting has slowed down a lot since the halcyon days of Curt's challenge. However, I have been quietly pottering away preparing for a big push on a British force for Battle Group: Fall of the Reich, and here is what they look like so far. 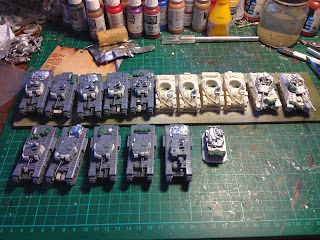 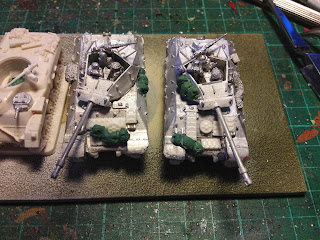 Basically I'm doing up a force of the 6th Guards Armoured Brigade supporting infantry from the 15th Scottish Division from early 1945. Oh, and a few supporting units from the 79th Armoured Div for good measure. So far we have three squadrons of Churchills and a Churchill AVRE, all from two boxes of the lovely PSC kits, a brace of 17Pdr Achilles from Skytrex, a Humber Scout Car from Peter Pig and four Ram Kangaroos from Forged in Battle. Some carriers and other bits and bobs are also in process. 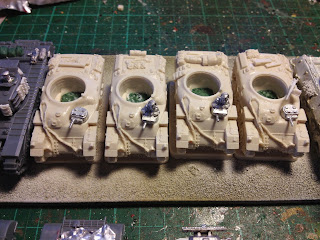 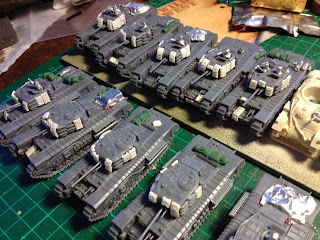 When I bought the PSC kits from War & Peace Games they were kind enough to chuck in a couple of Sherman sprues so that I could chop up the tracks and stick them all over the Churchills. As photos from early 1945 show, the Guards had some very comprehensive and creative views about welding extra tracks all over their tanks to boost the armour. The effectiveness of this measure is moot, and there is some suggestion that the extra track links may have actually made hollow charge warheads (ie Panzerfausts) more effective, but they certainly seem to have had a positive effect on morale.
Posted by Dux Homunculorum at 4:30 AM

Labels: Battlegroup Fall of the Reich