First thoughts on Kiss Me, Hardy

Having painted up four Langton ships, and with more on the way, I've been wanting to find a set of rules I like for Napoleonic naval warfare. Last night I had a go of Kiss Me, Hardy (KMH) from Too Fat Lardies, just having a solo game to see how the mechanics worked. So here are some initial thoughts. 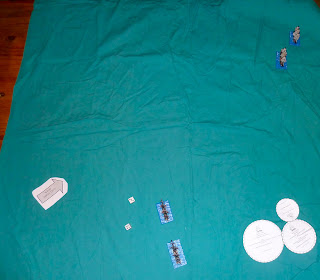 The set up at the start of the game. Note the incredible terrain.

The Rules
KMH is the first game by Too Fat Lardies that I have played. It is available from their website as a 49-page PDF download for 7 quid. The rules are generally easy to follow and clearly written, and include templates for the turning circles used by ships during the game. The basic mechanics of the game is explained well by the Last Hussar here, so I won't repeat his comments. Instead, this is how I found the game after playing a few turns.

I played a simple encounter between the French Hortense (40) and Scipion (74) against the British Phoebe (36) and Orion (74). Before playing I filled out a record sheet for each ship, recording such factors as the number of points of damage the ship can take (which is the same as its number of guns). It is also necessary to roll for each ship to determine the quality of the crew. This then gives the ships different abilities depending on whether it is British or French (KMH divides all navies of the Napoleonic wars into three groups - Jolly Jack Tars, Sans Culottes or Landlubbers). So for example, I rolled well for the Orion, giving it an elite crew. As a British ship the Orion is naturally crewed by Jolly Jack Tars, and as they were an elite crew they were able to fire double shotted at close range, were fervently determined (making them less likely to strike) and so on. In contrast, I rolled badly for the French Hortense (crewed by Sans Culottes), with the result that its crew were poor gunners and sailors, and also more likely to strike. This is a simple system that allows ships to have very distinct abilities in the game, and an optional rule allows a commander to 'buy' additional abilities.

After determining the characteristics of each ship, I set up the French and British squadrons on opposite corners of the table and diced for wind direction. The game started with the British having the wind on their quarter, able to crack on like smoke and oakum, while the French would have to beat up against the wind, which was on their bow.

The turn sequence is card driven, meaning that there is a deck of cards for different stages of the turn (British player fires, French player moves etc) as well as for events like changing wind direction, checking for fires, fighting boarding actions and so on. Card driven mechanics are central to Too Fat Lardies games as they introduce a degree of uncertainty and inability to meticulously plan all the stages of action. Richard Clarke, the main Lardie, gives an excellent explanation for his thoughts about game mechanics in episode 58 of the Meeples and Miniatures Podcast.If you don't already subscribe to this, by the way it's great and free. I get Meeples and Miniatures through iTunes, and there is nothing so nerdy as painting figures while listening to a podcast about painting figures. Anyway, Richard Clarke is very keen on building the Clausewitzian notion of friction into his games, which can loosely be defined as all the factors that mean that war never goes to plan. Personally I'm very drawn to this notion, and like unpredictability in games, but it isn't everyone's cup of tea.

So, in my game, the British move card came up first, and the Phoebe and Orion went straight for the French. I decided in this game just to get the ships into action as fast as possible and see what happened. When the French card came up, the Scipion and Hortense tacked to get the wind on their opposite bows. Tacking is accompanied by a simple die roll to check its success, depending on the quality of the sailors. In this case, the Hortense made a perfect tack, meaning that it could continue its full move after tacking. The Scipion made a successful tack, but wasn't capable of any further movement.

In Turn 2, the British move card came up first again, so the ships continued to close with each other. 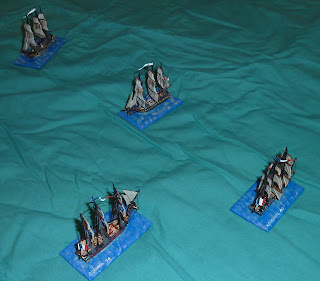 Turn 3: The Phoebe prepares to open fire on Hortense.

Turn 3 - it all happens. The British again moved first. The Phoebe (armed solely with carronades) moved alongside the French frigate Hortense at close range, using the frigate turning circle template to turn alongside. The slower Orion was still bringing up the rear. Unfortunately, the French move card then came up, so the Hortense moved ahead and turned, ending up on the Phoebe's front starboard quarter, while the Scipion moved alongside the Phoebe. 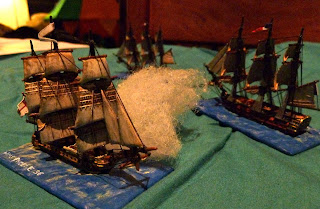 Phoebe opens fire, but with Scipion as its unintended target.

The next card allowed the British to fire, so Phoebe let fly at the much heavier Scipion. Combat in KMH is simple, fast and fun. Basically, a number of dice are thrown depending on the number of guns, and dice are added or subtracted depending on a various factors. So, as a 36 gun frigate the Phoebe would roll 4 dice, another die was added because the crew were Jolly Jack Tars firing at short range, and another because this was the initial broadside. This was then doubled as the Phoebe was firing carronades at short range, to a total of 12 dice. As this was short range, I needed 3 or more on each dice to hit. 7 Hits! At the same time as rolling the dice, I also rolled a D10 for special damage. I needed to roll less than or equal to the number of hits (ie 7) to inflict additional special damage, but rolled a 9. So, 7 boxes were marked off the damage boxes on the Scipion's record sheet, and it also lost one gunnery die as the Phoebe was firing at its hull (1D6 is removed from the gunnery dice for each 5 hits). 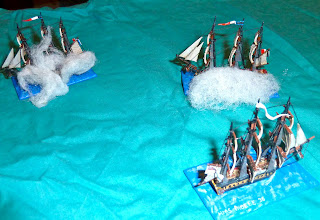 This probably gives you some idea of the sequence of play. In brief, when the French fire card came up the Phoebe was hit with punishing broadsides from Scipion and Hortense, including special damage resulting in a fire and high officer casualties. The Phoebe's damage points were reduced below 50%, requiring he to make a strike test, which she failed. At the end of Turn 3 Phoebe therefore struck as a more powerful enemy ship was within close range. A devastating turn for Phoebe, which is pretty much what one would expect if a frigate received a full broadside at close range from a 74 and a heavier frigate.

They are simple, fun and cheap! (Compare the price with the much more lavishly produced Warhammer: Trafalgar).
Personally, I like the card driven mechanics, especially since the use of cards allow a great deal of flexibility in adding special cards for different scenarios.
Although I didn't play them, the rules include pretty much everything one would want from a Napoleonic game, with rules for boarding actions, slipping anchors, running aground etc.
The national characteristics give different players very different tactical challenges. For example, the French propensity for firing at rigging is represented by giving the French a bonus if they do so at extreme range, whereas it is in the British interest to close to short range as quickly as possible.
The combat system is simple, and does away with having to compute multiple modifiers by simply adding or subtracting dice.

What I didn't like
It is a shame the rule book does not include a single page Quick Reference Sheet. I found myself flicking backwards and forwards a lot. However, there is a good QRS on the Too Fat Lardies Yahoo Groups site.
Filling out all the record sheets before a large game would take a considerable amount of time, although again there are various files on the Yahoo Group, eg giving record sheets for all the ships at Trafalgar.
Some aspects of the rules could be much clearer with just a little further explanation. I found myself confused about some issues, particularly:

1. Do bow and stern chasers have a firing arc, or only fire straight ahead? This also needs to be resolved for gunboats and galleys, and gunboats are not addressed in the rules at all.
2. What bonuses or penalties do bow chasers suffer? For example, crews classed as Landlubbers reduce 1D6 from their broadside dice. However, frigates only roll one die for chasers, so does this mean that Landlubbers can't use them?
3. The rules do not clarify whether a ship can change direction during its move, eg turning several points to larboard, going straight, then moving to starboard. Also, it is unclear whether a ship can tack at any point in its move, or only at the start. I asked both these questions on the Lardie Yahoo Group, and Richard Clarke sent a rapid response saying yes to both instances, so the support for the game is very good.

Would I play this again?

Definitely. I think rules lawyers and overly competitive types would baulk at some of the grey areas and unpredictability in the rules, but I think they offer a fun, simple and realistic-feeling system that would probably work equally well for anything from frigate actions to Trafalgar. I do think that some rules clarifications are probably necessary before a game in order to avoid misunderstandings. I'm impressed, and look forward to playing it against someone who isn't me. I would also look seriously at other Lardie games on the basis of this. So, an enthusiastic huzzah from the Dux.
Posted by Dux Homunculorum at 5:08 AM