Had a game of Saga yesterday with my friend Conan the Librarian to try out one of the new Northern Fury factions. I used my Welsh, including a unit of four mounted hearthguard, while Conan tried out the new Jomsvikings faction using my Vikings.

Here's the initial deployment, with the Jomsvikings on the left. We each fielded four-point warbands, Conan using two of hearthguard and two units of warriors, as did I although with one of the hearthguard units mounted. Our objective was simply to kill the enemy warlord. 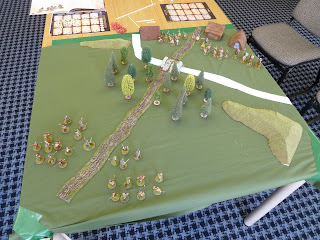 Two turns in, the Welsh have started moving into the woods, but Conan is happy. The reason he is happy is that his Jomsvikings are already starting to build up their level of Wrath. If you are unfamiliar with the Jomsvikings in Northern Fury, basically they have a track at the top of their battle board that keeps a record of their Wrath. Wrath accrues from various Saga abilities, and with several abilities the opponent can choose whether the Jomsvikings gain Wrath or use some other Activation Ability. For example, by spending a Saga die the Jomski can either increase his Wrath by one or activate two units - the choice being up to his opponent. The wisdom over on the Saga forum seems to be to minimise Wrath as much as possible when fighting the Jomskis, but I found this very difficult, as otherwise they were just too mobile. On the other hand, once they built up their Wrath, Conan's warband was able to do some pretty horrid things to my troops. 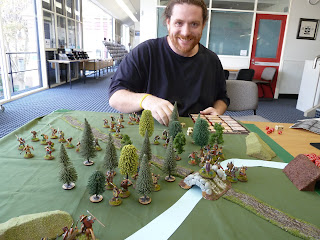 Over on the left flank I had some early success with my mounted hearthguard, reducing a unit of warriors to five figures. 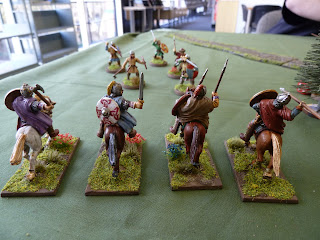 Unfortunately, the Jomski Wrath had now built up so that they were able to use the vile 'We are Legends' ability - basically cancelling the activation of any of my units. Losing my mobility, Conan's warlord and some surviving hearthguard charged my cavalry, loaded up with other abilities, and wiped them out. I should note though that even after this, and despite the problems I was having with the Wrath, I was still causing more casualties than I was suffering. 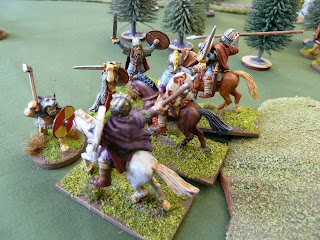 One partial solution I did find to 'We are Legends' with the Welsh was to use 'Taunting'. Over on the right flank a couple of turns later I could see that Conan had 'We are Legends' ready to go on his battle board. So basically I didn't spend any of my dice at all on activating my units, as I knew they would be cancelled. Instead, I put a die on 'Taunting' and boosted up the melee strength of one of my units of warriors, then forced a unit of Jomski hearthguard to charge them. I killed 3 and lost 1, so that worked pretty well.

Over on the left flank again, the Jomski warlord was rampaging around, but I was able to use javelins to kill off the hearthguard with him, leaving him isolated. A chance for victory! I charged in with seven warriors, using Strength in Numbers and the Combat Pool to boost my attack dice. Conan boosted the armour of his warlord to 6, but still, I had 13 dice to roll. 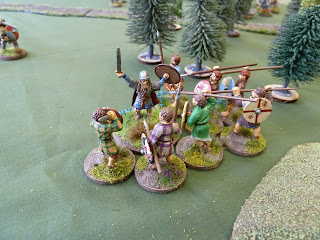 And here they are. Not a single hit. Instead, I lost three warriors. 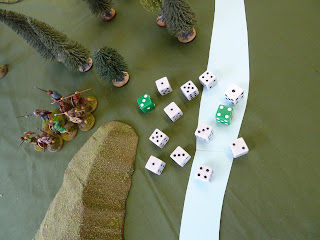 To move to the depressing denouement, I charged in my warlord with a unit of hearthguard. They couldn't quite reach to contribute to the combat, but could take any hits. I can't rember everything the Jomskis did, but the combat ended with most of the hearthguard dead and the Jomski still very much alive. 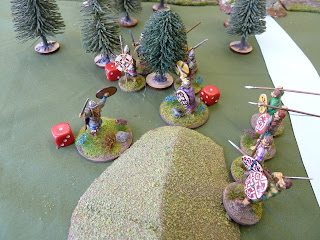 It was now Conan's turn - he charged my warlord pumped up with Saga abilities and it was all over. 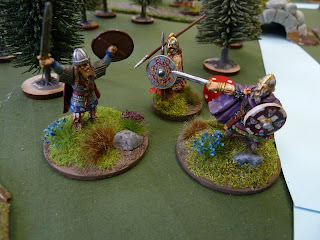 The verdict? Well, it was a great game and I had a blast. The Jomsvikings are a very hard nut to crack, and I'm baffled about the best way to deal with them with the Welsh. For most of the game I was inflicting more losses that I suffered, particularly when I could use javelins and rough ground. However, this was at the expense of allowing Conan to build up the Wrath of his warband, which was devastating when he could use it to effectively make me miss a turn. I'm keen for a rematch.
Posted by Dux Homunculorum at 1:50 AM