Rematch at the Man Cave

On Wednesday last I headed over to Paul's Man Cave Away From Man Cave for a SAGA rematch. This was only Paul's second game, but we changed things around a bit by having a 6 point game of Sacred Ground. I had Welsh, Paul opting for Anglo-Danish.

Desperate for victory, Paul started softening me up from the outset with his homebrew, the fiend. He certainly makes a damn fine ale, with my favourite being the Thor's Thirst, with a punch like Mjollnir. Naturally Paul chose to drink his from a horn, which certainly added to the intimidation value. 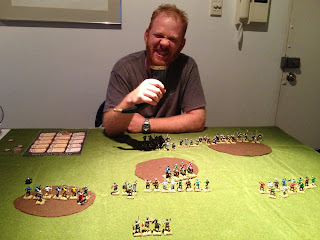 I was travelling light, walking down to Paul's after school, so had the pleasure of using his figures. He has some great conversions, and I was particularly taken by the Welsh cavalry he had made using Wargames Factory Vikings and Celtic Cavalry. Nice. We MacGyvered together some terrain, then realised that neither of us had any dice. Consternation. Fortunately the smart phone came to the rescue, and I found an Ap that allowed me to roll up to 5 dice at a time. Pushing a button didn't quite give the same thrill as actually rolling a handful of dice, but good enough.

Once we got started, I won the roll to go first and raced my mounted hearthguard onto the hill in the centre. As often in Sacred Ground the central hill became the focus of the battle as Paul moved several units of hearthguard and warriors up to assault it. I was able to draw some of them out of position using the Taunting ability, and benefited from the extra mobility one unit of mounted hearthguard gave me. Paul caught on quickly (which he does) and used Intimidation to stop my hearthguard retreating, then killed half of them. 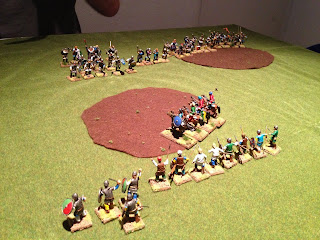 In the end I got lucky and was able to isolate and kill his warlord, at which point we called it a night. Another great night playing a great game with a great opponent, even if the Thor's Thirst means my recall of all the details is a little hazy.
Posted by Dux Homunculorum at 8:58 PM