Next year is the 70th anniversary of Kursk, and we happen to teach an elective topic on the War on the Eastern Front to our boys in Year 10. So the plan is to build on our success with SAGA at the school wargames club by introducing BGK as a second main club game. The plan is to paint up models and figures as a club, build some ace terrain and start playing the game asap, all in preparation for some major display games to coincide with the anniversary in July-August next year. The boys are keen, and already putting together some 15mm T-34s.

I'm planning to keep track of our progress on the blog, although with holidays starting in a week we won't really be getting underway until the start of next year. However, I wanted to give a huge shout out to Will Townshend from the Plastic Soldier Company. A couple of weeks ago I wrote to Will to tell him our plans and ask if he had any posters etc we could use at school to publicise what we're doing. He wrote back straight away to say that he was very keen to support school clubs, and that he would send me a hamper! 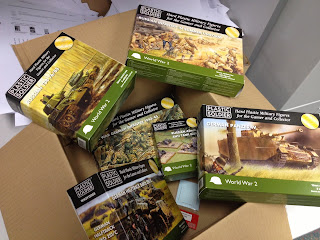 This is what arrived yesterday. Enough tanks, artillery and infantry for both sides to make a great start on the project, along with decals for the Gross Deutschland Division. Some of the boys will work on these during the break, but next year I'm envisaging a bunch of boys sitting around the table after school learning painting and modelling techniques, then being able to use the troops they've put together as we start playing scenarios from BGK.

Whenever I've heard Will interviewed on Meeples and Miniatures, he's struck me as a very smart bloke who understands how to run a business and who is doing really good things for the hobby. It is so great to see his support for getting kids interested - thanks Will!
Posted by Dux Homunculorum at 2:01 AM