This week I've been chipping away at the next unit of Fireforge knights, but also managed to finish a unit of Gripping Beast Sons of Death (Gall-Geidhill) for SAGA. These feature as a unit of Swords for Hire in the rules, but I mainly got them because I like the sculpts (by Bill Thornhill). One of the nicest things about Bill Thornhill's sculpts is the way the right hands come as a separate piece holding a weapon, rather than the less convincing open hands of most of the earlier Gripping Beast figures. 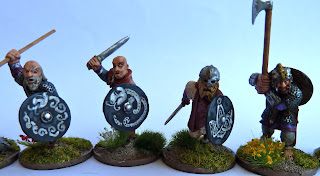 Since they are supposed to be a unit of mercenaries I gave them a consistent colour theme on the shields. Most of the designs are supposed to look pretty Norse, with a few nods to some Irish Celtic influence.

I'm looking forward to using these in SAGA. in particular, they should scare my Breton nemesis quite a bit. Heh. 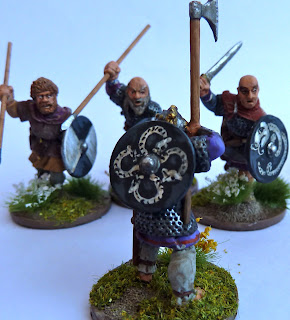 Posted by Dux Homunculorum at 1:36 AM