Here's the thing. I seem to have acquired a bunch of 6mm Baccus Napoleonics, and they are steadily clamouring for some attention. 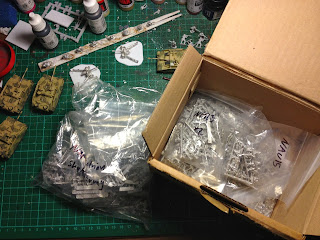 The problem is that I am somewhat prone to leaping in to massive painting projects that take years, only to discover that I have committed myself to some scale/basing convention/rules system that nobody else uses or likes, and that even I find tiresome before I've ever finished painting an army. My current aspiration is to have a stab at doing up some 6mm Napoleonic armies before I am too senile to tell the difference between an Uhlan and a Landesknecht. At present I have the basis of a 1813 Austrian army and some French.

Ideally, I would like to base up my figures so that I can use them in Lasalle, Back Powder and anything else you good people suggest. For example, should I look into Polemos? Napoleon at War? I don't actually own Black Powder yet, not have I ever played a game, but people seem to like it. Will it work with 6mm?

I'm thinking that basing my units on 60 X 30mm bases will allow me to play any of these rules, perhaps even with the possibility of meeting somebody one day who has a similarly based army (!!) This is a big commitment in figures, for example meaning that one Austrian large Regiment of foot would be made up of 6 bases, each holding 24 figures, but I'm embracing the mass battle effect that 6mm offers.

So what do you think? Is this basing a good idea? Are there other rules it will work for that are worth considering? What do people play? I am of course aware that such topics have been discussed on TMP, and that I could post my questions there, but I usually try to avoid TMP because of all the angry people. Following threads about Napoleonic rules usually just makes me wish people weren't such dicks. Of course, there are lots of lovely helpful people as well, so no offence intended to them. By definition, if you are a follower of this humble blog you are obviously a person of taste and discernment, and full of gamerly bonhomie.
Posted by Dux Homunculorum at 11:51 PM