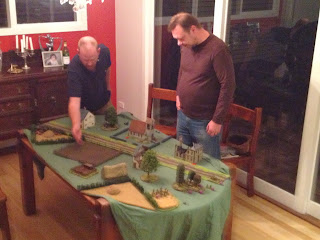 Last Wednesday night I was lucky enough to have Man Cave Paul and Ian from War and Peace Games come over to the Duchy for a game of Bolt Action. Paul and I had never played before, so Ian was kind enough to talk us through a demo game using my Brits and his Germans on Ian's lovely terrain.

Before getting started we had a great dinner of roast beast, courtesy of the Duchess, along with a great bottle of French white wine Paul brought along. This was a bottle with a history, being sent over to his ship (HMAS Newcastle) by the captain of FS Somme, a French tanker, during a Replenishment at Sea off Somalia. 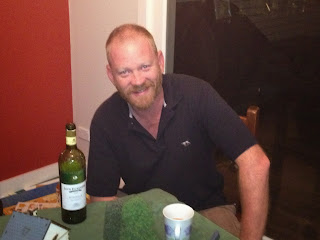 Paul wrote up an AAR of our game, in which he was kind enough not to gloat at the drubbing he inflicted on my Brits. Take it away Paul: 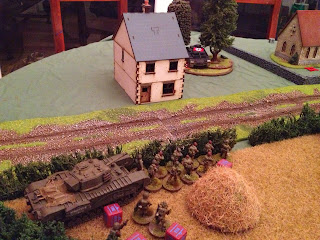 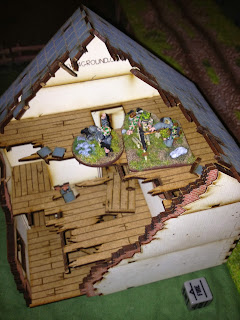 I was in a line deployment, starting hidden
Left - MMG team and 1 squad in buildings 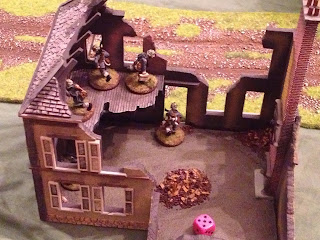 Alan's pre game bombardment was effective so I started with a bunch of pins on squads. On the right the Brit Paras got bogged down across the road from the building the Jerries occupied and they got hosed by that squad and the PZIII's MGs turn after turn until there was only 3 men left with 6 pins on them. In return the Centaur blasted the building and killed the squad, which was then heroically defended solely by the German Officer - give that man an Iron Cross!

On the Left the German MMG team was suffering from the pins and the British inf sections moved up nicely using cover. As soon as they broke cover to rush the building the Germans on that flank passed all their tests and in a withering crossfire whittled the lead section down to 3 men in a single turn. The second Brit supporting section then wiped out the German MMG team before they could relocate. The German squad then focused on the Brit 6pdr, which was taking ineffective long range shots over the whole length of the table at the Pz IIIs flank, and wiped it out.

The German sniper in the church tower didn't get any spectacular successes, but removed a few figs and added a lot of pins. This rattled the Brits so their FO brought down a barrage onto the building. Lots of pins, no KIA.

As we ran out of time, the Centaur tried to rush forward but was caught by the Pz III which took an effective flanking shot, set the British tank on fire and its crew bailed out. The British infantry on the left were poised to try and rush the Church with their last Squad (minus 2 figs, incl the Bren), while the Germans still had 2 full 5 man teams, the sniper and a Pz III. Brits conceded at that point. 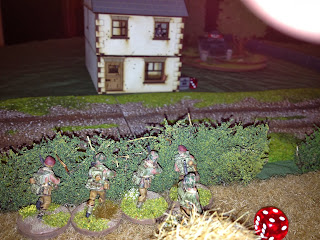 A fun game indeed. Alan and I both found the Bolt Action system easy to pick up, and quick to play. A few abstractions were curious but reult in fast play and I loved the alternate activation system which has both players involved in the games the whole time.

Thanks Paul, I'll take it from here. Like Paul said, we had a great time. Bolt Action seems like a fun game to play with mates. I think I'm likely to engage more with Chain of Command (which I can't wait to play), but the great thing is that painting up a little force allows you to play both!

Typically, my Brits were hammered as it was their first outing, and I felt particularly bad about the lovely squad of Paras Tamsin painted for me, who charged into position behind a hedge and spent the rest of the game getting systematically shot up by every German in sight. Sorry Tamsin! 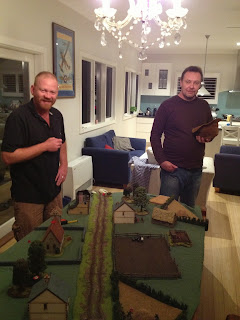 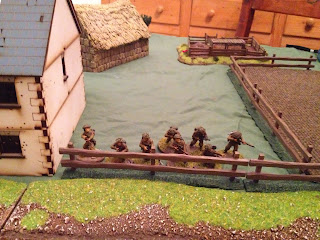 Thanks heaps to Paul for a great game, and particularly to Ian for being such a good teacher. Buy stuff from him - he 's an excellent bloke.

Dux actual out.
Posted by Dux Homunculorum at 3:27 AM