This Week in the Duchy 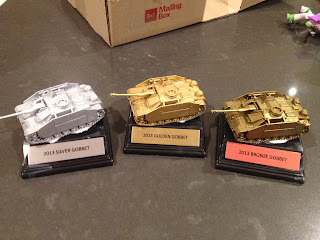 Phew! It is nearly the end of the school year, and as always the insane busyness ramps up a few notches. It has been a big week, partly caused by trying to cram in as much gaming time with Cap'n Paul before he relocates to Canberra in a couple of weeks. At the moment it is all smiles and bonhomie, but we are also starting to gear up for ruthless competition in Curt's Painting Challenge. Paul has kindly offered to make a trophy for our side wager in Curt's challenge, so stay tuned. So far he is doing a good job of intimidating me by explaining at length how he has drawn up spread sheets to track his figure painting progress. Roll on December 15.

Last night Paul and I went on an adventure to visit Ian of War and Peace Games fame. Not only did Ian cook up a fantastic bolognaise for us, but we got to explore his warehouse where he keeps his stock. Nerdvana. I'm sure the puddles of drool are still there, and Paul had to be physically restrained from throwing himself bodily at all the Bolt Action goodness, while I only just managed to ignore the siren call of the wall of SAGA lead. Fortunately I spent a lot of money a couple of weeks back on some terrain, otherwise I would have run seriously amok. I was seduced by one shiny thing though, the brand new Fall of the Reich supplement to Battle Group Kursk. There they were in a big lovely heap, smelling of new book. I'm only flesh and blood. 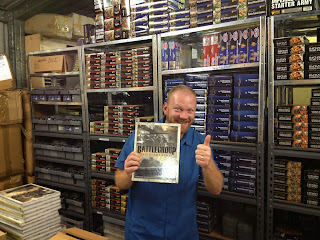 Paul sharing my excitement about Battlegroup: Fall of the Reich

Battle Group Kursk was the main reason for our visit in the first place. We had been planning to pay Ian a visit for a while, and since he had never played BGK, and Paul had only had one quick game, the plan was for me to run through a game with them.

I put together a couple of 500 point battle groups, with Ian and Paul paying the Germans. I decided to keep it simple, so didn't include any indirect fire. Instead, we basically played a tank-heavy meeting encounter, with my company of T-34s and an SU-122 against four Pz IV Hs and a Tiger, supported by a platoon of infantry each and a few other bits and bobs.

The game was great fun. Each side gradually got their units on to the table, with the Germans getting into some good ambush positions while I built up enough of a mass of Soviet armour to launch them across the board. When I finally unleashed them they scared Ian and Paul a lot, as they suddenly had to contend with T-34s rapidly closing to point blank range. The game see sawed a bit, with Paul rolling more 1s than is mathematically possible, then pulling out two double 6s in a row, the swine. Meanwhile, Ian had uncanny luck drawing battle counters as I pinned or knocked out his units, managing to draw a series of the 'special event' chits that left one of my T-34s immobilised and another blown up by a mine. Then, in a single turn Paul managed to brew up 4 of my tanks, and it was all over apart from the gloating. Ooooh I love BGK. Such a fun game. 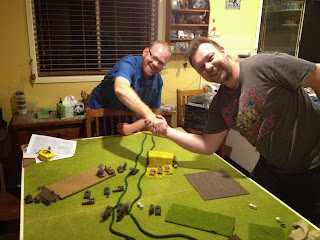 My only modelling project this week was completing a set of trophies for school, which appear at the top of this post. In order to cement the History Department's reputation for eccentricity, every year we run the 'Golden Gobbet' competition, a gobbet being an unfamiliar historical source that the boys have to try to analyse and relate to their existing knowledge. I get the trophies made up and adorn each with a different armoured vehicle each year, since the competition is held with the boys doing a unit on the Eastern Font in WWII. This year I painted up some 20mm StuGs as trophies, which the Headmaster presented in Assembly today. I even got him to correctly describe them as self-propelled guns rather than tanks. What a lucky Dux I am to have a job where I can do stuff like that!
Posted by Dux Homunculorum at 2:25 AM