First Thoughts on Battlegroup: Fall of the Reich 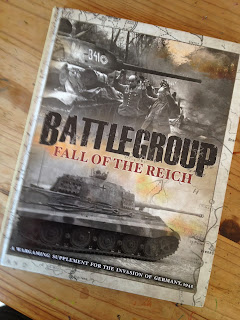 As regular visitors to my blog know, I am a big fan of Battlegroup Kursk, and have gained huge enjoyment from building up my forces and playing some fantastic games over the past year. You can see my thoughts on the rules here.

Since I wrote that review, two further supplements have come out for the Battlegroup rules, Overlord and Fall of the Reich (FotR). I avoided Overlord, mainly because I was already so committed painting up forces for Kursk, but when I saw a big pile of shiny new copies of FotR when Paul and I visited War & Peace Games, I found I couldn’t resist (partly because I was goaded by Paul). Since then I’ve read through the supplement, although haven’t actually played a game, and thought I’d share my initial reactions. So, what do you get for your money? FotR is a 195 page hardback, following the same format as Kursk and Overlord. As with Overlord, this does not contain the core Battlegroup rules, for which it is necessary to either buy the original Kursk book or the soft cover rule book.

The first 25 pages or so give a brief historical overview of the invasion of Germany in 1945, covering both the Eastern and Western fronts. Pages 31-38 cover the specific rules for FotR and the new Battle Counters, before we get to the real meat of the book, the army lists (pages 39-112). These cover the German army, British, Americans and Soviets, and each list is introduced with a brief description of the general status and disposition of each army in 1945, along with an explanation of new equipment available to it and any specific rules relating to the army list. We then get four generic scenarios to add to those in the Kursk and Overlord books, aimed at capturing some of the specific nature of battles in 1945 (urban assaults, delaying actions against overwhelming odds and so on). This is followed by a brief hobby section (pages 121-130) with some suggestions for painting a T34/85 and a British M5A1, then a short narrative campaign of six scenarios following the final Soviet push to Berlin. The last section of the book (pages 148-184) contains tables of statistics for all the equipment covered in the army lists, a QRS, a page of Battle Counters and finally, a very interesting page of Designer’s Notes by Warwick Kinrade. Actually, I just checked and realised that the QRS and Counters are repeated at the very end of the book on tear-out pages, which is a nice touch. 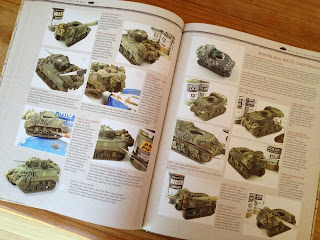 I won’t go into much detail about the production value of the book. Suffice it to say that it is of the same high standard as the original Kursk book, which I commented on in more depth in my original review. The book is clearly and engagingly written, and illustrated with inspiring gaming photographs, nicely painted models and archival photographs. As with all the books, an index would be nice, especially as some rules are occasionally hard to find. Case in point is the ‘German Defenders ad hoc Platoons’ rule, referred to at the start of the German army lists on p. 53. The logical place to put this rule would have been with the rest of the supplement-specific rules on pages 31-36. However, you will actually find it over on page 114 at the start of the Scenarios, which is quite confusing when you first try to find the damn thing.

Although I am yet to play FotR, I am familiar enough with Battlegroup Kursk to see that this supplement would provide games with a very different feel. This is not just a generic WWII game with different tanks, but has a whole set of features hardwired into the supplement to highlight some of the ways that warfare in 1945 was very different to 1943 or 1944.

Most obviously, this is achieved through the army lists being being specific to their period. And I don’t just mean that the combatants have different gear, such as infra-red equipped Panthers and Jagdtigers for the Germans. Rather, in the case of the Germans, the structure of infantry units reflects the ad hoc nature of German battle groups in the last months of the war. It is still possible to field a reasonably intact unit up to Platoon size of German infantry or Panzergrenadiers by using the lists from previous supplements. However, the specific infantry units covered in FotR are Volksgrenadiers, Volkssturm and Auxiliary troops such as RAD or Hitler Youth. As just one example of how these units are made to feel very different to German infantry in previous supplements, the poorly trained Volkssturm and auxiliary platoons have LMG teams, if they have them at all, integral to their rifle squads, rather than as separate units. The ability of these infantry units to use fire and movement tactics is therefore completely different to that of a 1943 or 1944 German platoon. The unfindable 'Ad hoc Platoons' rule is also great, allowing Germans when defending in scenarios to field platoons made up of disparate squads (eg a high-quality Fallschirmjaeger squad might be bolstered by Volkssturm or Hitler Youth), although at the expense of a platoon HQ and officer. In addition, players can 'buy' some ability to influence the resilience of the German troops in a battle from their army lists. For example, British and US players (but not Soviets!) can force the Germans to take a Battle Counter at the start of the game, reflecting their lack of willingness to fight, whereas the German player can purchase greater resilience, particularly when fighting the Soviets.

As one minor gripe, the British in FotR are able to use their special Bren Team rule, which allows the Bren team to either remain integral to an infantry squad or be detached. However, this rule is not explained in FotR, and naturally does not appear in Battlegroup Kursk. This puts players who don't own Overlord at a bit of a disadvantage, although the rule may be covered in the soft cover core rule book as well. I do think it is important that supplements do not require knowledge of each other, especially as it would have been a minor task to include the Bren Team rule in FotR.

Along with the distinctive army lists, FotR includes a short set of special rules to help represent some of the nature of battles in 1945. For example, these include some rules specific to the weapons of the final stages of the war, such as allied tanks carrying additional armour against Panzerfausts, German jet fighters and British APDS ammunition. Street fighting receives two pages of good looking rules, explaining, amongst other things, how to directly target buildings with artillery to cause them to collapse. Although not everyone will agree, I also applaud the optional rule dealing with representing civilian refugees on the table, rather than the common wargaming illusion that warfare in built up areas somehow occurs without civilians being present. Nightfighting is also covered, allowing the Germans to make use of their infra-red equipment.

Finally, the Battle Counters contained in the book also help to capture the chaotic conditions of German resistance in 1945. Most of the counters are unchanged from previous supplements. However, the Germans alone are subject to counters indicating ammunition or fuel running out, and may also suffer from units receiving dud Panzerfausts. The 'Endkampf' counter simulates the unpredictable resolve of German units, with the German player either adding to his Battle rating or taking extra battle counters, depending on who drew the token. The German player also has the ability throughout the game to use any of the non-numbered counters he draws (apart from 'Endkampf') to take a 'Beyond the Call of Duty' test on one of his units, representing desperate resistance. Overall, as you can tell, I'm very impressed with this supplement. It has me rethinking my decision not to buy Overlord, but more dangerously, has set me thinking about all those lovely late-war Brits that Plastic Soldier Company has been coming out with... and a big urban terrain board.... and the fact that Peter Pig makes Volkssturm in 15mm....

I'll try to resist these impulses for a while. As a final observation, when I was thinking about what I liked about FotR, I happened to pick up the latest issue of Wargames Illustrated (#315). Now, I have never played Flames of War, despite it being The World War II Miniatures Game, but it is interesting that they have put out their own supplement for tank battles in Eastern Germany in 1945, named 'Desperate Measures'. Battlegroup is of course the natural competitor for FOW, and amongst other things the holy alliance of Battlegroup and Plastic Soldier Company seems to have frightened the FOW people enough to prompt them to produce their own box of plastic T-34s, albeit at a higher price than those from PSC. I would be really interested to hear if anyone is able to champion FOW as giving a more authentic- feeling sense of the differences between different campaigns than what Warwick Kinrade is accomplishing with Battlegroup. I must say that reading over the battle report on pages 24-35 of Wargames Illustrated did nothing to convince me I really should give FOW a go. Photos of Hetzers and Stugs lined up axle to axle blazing away at a smiliar line of T34/85s are more evocative to me of a Napoleonic grand battery than anything that is likely to have been seen in Eastern Germany in 1945. In contrast, FotR looks to have captured something of the asymmetrical nature of the war in Europe in the last months of the Nazi regime.

Labels: Battlegroup Fall of the Reich