Had an absolutely cracking game of Battle Group Kursk last night, which I'll write up when I have a chance. For the game I painted up a couple of specialist German vehicles. The first is a SdKfz 251/16 flamethrower vehicle, which BGK lists as the platoon commander's vehicle for an armoured pioneer platoon. I'm pretty sure that's not accurate, as I would have thought they were used as specialist support rather than command vehicles, but hey. The kit is a standard PSC Hanomag converted using their very handy special conversion set. 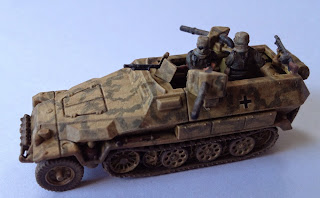 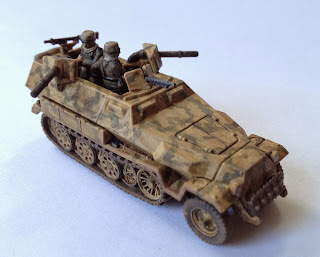 Vehicles like StuGs tend to run out of ammo very rapidly in BGK, which makes it imperative to bring along some logistical support. I generally just use supply trucks, but I have a box of the Minairons 15mm Panzer Is that the good people at War & Peace Games sent me, so I converted one as a armoured Munitionsschlepper. 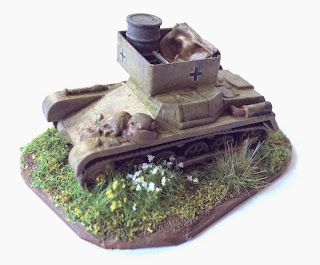 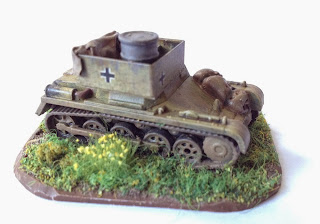 I just had a few photos to work with, but as I understand it the later Munitionsschlepper I just had a box superstructure on top, off-centred to allow access to the side crew hatches. This was much simpler than the earlier version that had a large hatch over the turret ring, but must have much less room for stowage. This was a dead easy conversion, which is no doubt only vaguely accurate, but I'm pretty happy with it. 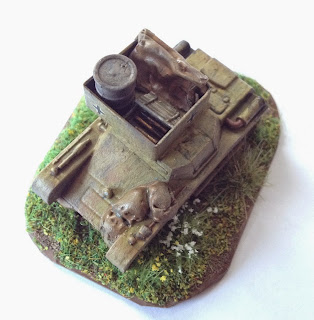 Posted by Dux Homunculorum at 5:04 AM