SAS for Battlegroup Fall of the Reich 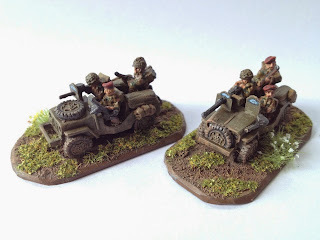 One of the Recce options in Battle Group: Fall of the Reich is a SAS Jeep Patrol. It isn't cheap, costing 66 points, but it is very powerful. Each jeep carries a three man team, including a Bren Gun, and are classified in the rules as Assault Troops, so are particulalry good at close assaults. The Jeeps each carry two Vickers K guns, and in their Recce capacity the teams are able to act as artillery and air spotters and benefit from the Behind Enemy Lines rule, meaning they can be placed anywhere on the board after the rest of everyone's recce has been deployed and then start the game on ambush fire. 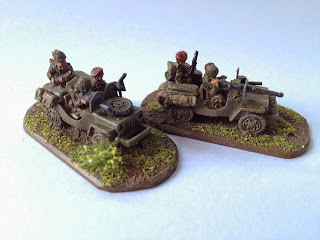 I had a couple of airborne recce Jeeps lying around from Skytrex (I think), so did a bit of rough converting so they resembled SAS Jeeps from 1945 in NWE. There are lots of things wrong with them. The Vickers K mounting at the front should be for twin guns, the shields aren't right, blah blah blah, but I think they sort of look the part, and I'm certainly looking forward to trying them out. I'm also reasonably happy with my first attempts at Denison Smocks in 15mm. 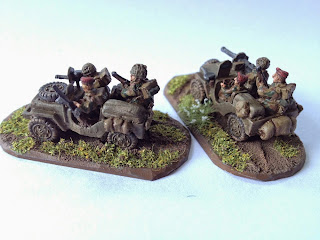