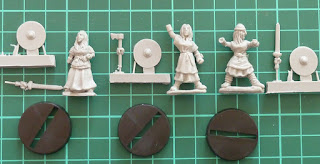 This week I was chuffed to get hold of the first three realistic Viking women warriors from Annie Norman (aka the Dice Bag Lady, aka the mastermind behind Bad Squiddo Games). I'm a huge fan of what Annie is up to. Over on her site she is gradually trying to draw together lots of different ranges of realistic female figures for different periods, produced by the likes of Copplestone, Artizan and so on. This is good news for those of us who don't particularly want to be painting figures straight out of a 14 year old boy's fevered imagination all the time. It's particularly good news for those of us with daughters who we are trying to get into gaming. For my own little 8 year old Viking, I'm keen to make her a warband for SAGA with a good scattering of female characters, and no chainmail bikinis.

Annie is a big SAGA fan, and seeing a gap in the market for some realistic shield maiden figures, she has started commissioning a range of figures herself. The first of these (Lathgertha, wearing the mail shirt) is already released, the other two are up for pre-order on Annie's site. And more are on the way! 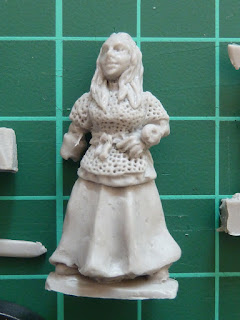 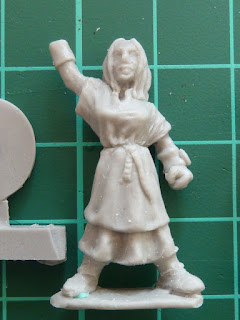 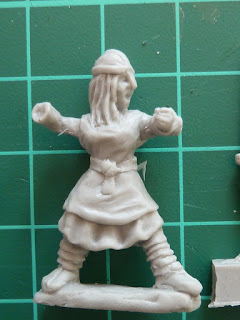 I was lucky to be able to get hold of some early production figures, so here they are. They are well cast in resin with no mould lines of any kind each coming with with a separate sprue with shield and weapon cast in a closed hand. Each figure also comes with a slotta base.

This is a great project that Annie has going, and I wish her every success. I'm looking forward to getting some paint on mine! As Neil Shuck would say: 'watch this space.'
Posted by Dux Homunculorum at 9:34 PM