Isn't it great when you've been working on an army for a while and you finally get the chance to chuck at least some of it on a table and roll some dice? 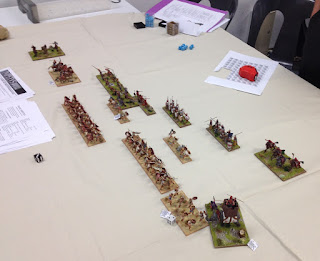 Last night at our regular Odin's Night club, Steve and I gave our Zama armies some exercise. As our armies grow they are destined to try out various sets of rules, but last night we just had a game of Basic Impetus. I used to play quite a lot of Basic Impetus, but lost a lot of steam when SAGA came out. It was great to play it again, and remember how much I like the game. It's simple, it's bloody, and it makes me think far more about the narrative of the battle than the intricacies of using rules against my opponent. 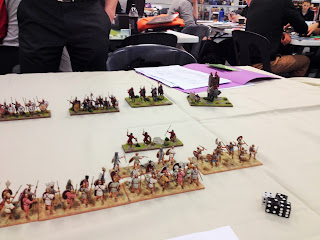 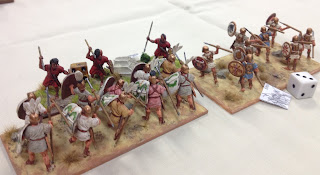 As we know, there is an immutable law of the universe that newly painted armies always get slaughtered in their first battle. Since this was the first time either my Romans or Steve's Carthaginians had taken to the table we were interested to see who the Dice Gods would favour. They smiled on me, praise their name, and I managed to win a decisive victory over the Carthaginians. Fortunately, in the deployment I was able to keep my cavalry away from Steve's elephant, neutralising it instead with some allied light infantry. My general's cavalry over on the opposite (left) flank meanwhile managed to hold off attempts by Numidian light horse to get around my flank, while my legionaries in the centre steadily destroyed their Carthaginian opponents.

So much to like in these rules! Thanks for a great game Steve, and I feel your disappointment. During the evening his mood steadily slipped from this: 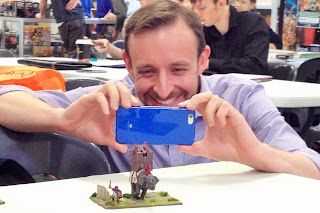 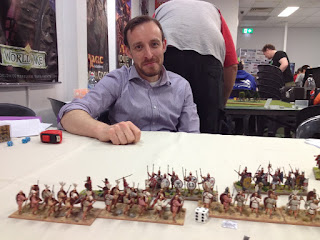