Knight's Cross - the best game ever?

Canvas Eagles and its WWII version Knight's Cross are two of my favourite games. At the school I used to teach at we had a long-running Canvas Eagles campaign using 1/72 aircraft models that regularly involved up to ten players. Great fun!

I changed jobs earlier this year, and naturally set up a wargames club. We will be holding a Basic Impetus tournament in the new year, but for Term 4 I ran a Knight's Cross Battle of Britain campaign. If you haven't played Knight's Cross or Canvas Eagles, I strongly recommend them. The rules are easy, exciting and intuitive, the games look brilliant, they are great for multiple players, and the rules are free! If you play a free-wheeling dogfight game people can enter and leave the battle at will, making it perfect for clubs and schools where there are lots of demands on people's time.

Check out the Canvas Eagles site (and buy some of Eric Hotz's great gaming mats while you're at it):
http://www.eaglesmax.com/

And check out the Knight's Cross Yahoo Group:
http://games.groups.yahoo.com/group/knightscross/

Here are a couple of photos from a Knight's Cross game I played with Paul the Galloglaich recently. Observe the impeccable formation flying of the Luftwaffe, with the RAF's 609 squadron flailing about in all directions. 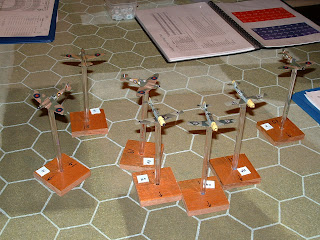 HE 111's head for home after successfully bombing Debden airfield. Meanwhile, a Spitfire wreaks vengeance on a BF 110. 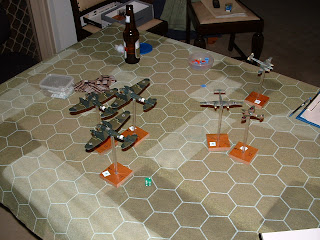 By the way, the stands are made from wooden bases (kindly cut up by my brother) with transparent BIC biros stuck in them.
Posted by Dux Homunculorum at 4:59 PM