Spanish for the Great Italian Wars

Here's another experiment from earlier in the year.

For wargaming the Great Italian Wars in 1/72 scale we now have the Landsknechts and cavalry from Dark Dream Studios. We also have Conquistadors from Revell and Caesar. Nice figures, but a whole lot of sword and bucklers but only a few pikemen in the Revell set. As an experiment, I took one of the Caesar figures, cut away the bucker and sword, and replaces his head so that he looks in the opposite direction. The figure on the right was converted from the one on the left.

I then stuck a pin through both hands, so that they would stay in alignment for holding a pike, and stuck the figure in boiling water, all of which sounds like something that the Spanish were no doubt doing to people in the early C16th. The Caesar plastic goes very bendy in hot water, and stays in its new position after it cools down. 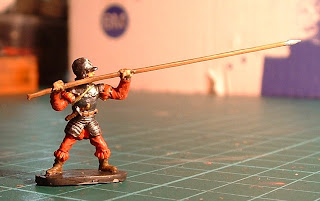 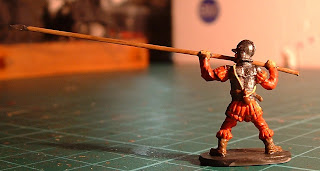 Result. Conquistadors can be converted into other figures suitable for the Great Italian Wars. I've also seen some converted into cavalry over on Benno's Figures. The Swiss are a tougher prospect...
Posted by Dux Homunculorum at 6:03 PM