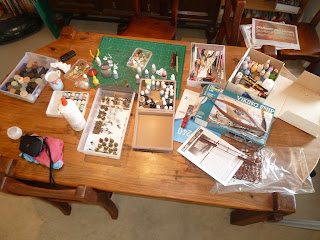 Just had a great 24 hours of hobbies. On Tuesday night I went over to Paul the Galloglaigh's for a game of Saga, using my Welsh warband for the first time against Vikings. Had great game. The Welsh are brilliant in Saga - there are all kinds of ways of being tricksy using the battleboards. I was able to set a trap for the Vikings that worked perfectly, ending with the Viking warlord dead in a swamp, so chalked up a rare victory against Paul.

The planets aligned on Wednesday, giving me a whole day to devote to making stuff. The Duchess went off to Latin Summer School, I dropped the twins (Assault and Battery) at day care, and Boudicca the Five Year Old is away staying with her grandparents, so I came home, revelled in the silence, made a cup of tea and got to work.

My 'Man Cave' is a couple of boxes that I get out at night when the kids have gone to bed and the dining table, so it was a rare pleasure to be able to make a mess for a whole day.

First up, I finished four werewolves from West Wind Productions for Pulp Adventures. 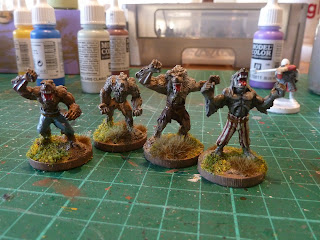 Next, I made five terrain boards. 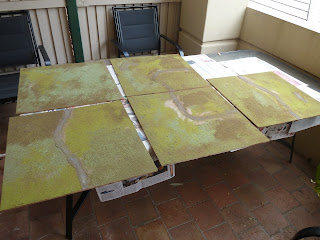 These took some time, but I was able to make a start on turning a Revell Viking ship into a waterline model. You can see it on the table, looking to the untrained eye a lot like a lovely kit in the process of being ruined. Anyway, I hacked off the bottom with a saw, but I need to get some sandpaper. Finally, I made a start on some Anglo-Danish hearthguard, got up to the post office to pick up a Playmobil Viking Ship we got off Ebay, picked up Assault and Battery and even did the vacuuming.

Great day - haven't felt so relaxed in about a year.
Posted by Dux Homunculorum at 1:27 PM