It has been a grim week in the Duchy. Not only was I attacked by zombies earlier in the week, but nearly the whole family has had a vile gastro virus thingy. The only person immune has been the boy twin (Assault) who has spent the last couple of days jumping on and trying to rumble a group of largely comatose suffering lumps. Thank god for TV. I even watched Mary Poppins for the first time and quite enjoyed it. Who knew that chimney sweeps had such a great time of it? And what the hell accent was Dick van Dyke attempting?

In moments of lucidity I have been able to chip away at a few painting projects, and managed to finish my Bolt Action Churchill. I quite like it, but then I love Churchill tanks. It is supposed to be a tank from C Squadron of the Coldstream Guards, all of which were named after famous ships in the Royal Navy. 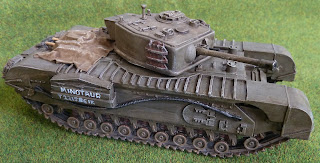 As I said in an earlier post, I like the model, but was a bit annoyed to find the towing cable on the left side partly miscast, and the towing hook at the front missing. 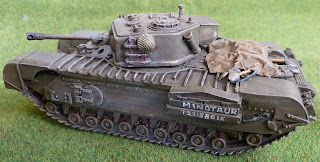 Here it is with some support from the Durham Light Infantry... 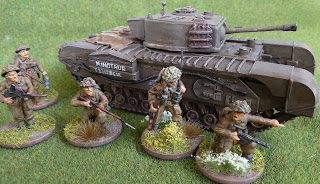 And with some of Tamsin's Finest.

Posted by Dux Homunculorum at 2:18 AM