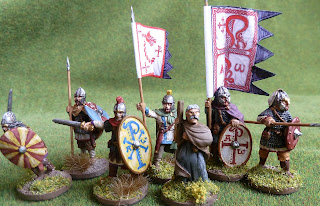 This week I just finished off a few more Roman Brits that were in the painting queue - a couple of warriors, a couple of standard bearers, a priest and the limited edition 'Arthur' figure that came with the pre-order of Dux Britanniarum. The other figures are Gripping Beast, with the exception of the bannerman with the smaller flag, who is from Westwind. The banners are from Little Big Men, the bigger one causing me some problems as for some reason it wouldn't stick to the paper backing properly. I ended up having to glue it down with diluted PVA, which made the whole thing a bit stiff and hard to get folds into. 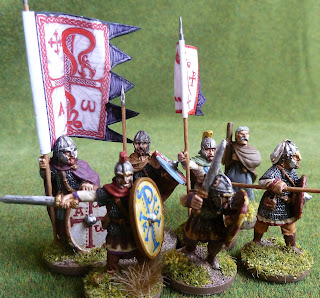 So what's on the painting tray now...I try to discipline myself to never exceed what can fit on this board when deciding what's in the painting queue. You'll see there are a few random Romano-Brits, some later Saxons from Miniature Design Studios, and 21 early Saxons from Westwind. And a whole lot of empty space...mwahhahhah! 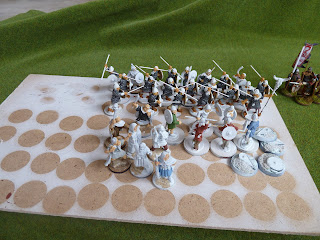 Posted by Dux Homunculorum at 9:58 PM