The Duchess and I are enjoying two golden days during which the twins are at day care and the Mini Duchess is still at school, while I'm on holidays and the Duchess has finished her studies for the year (she got another High Distinction in her Latin exam - brains AND beauty). We vaguely kicked around the idea of going somewhere today before deciding that all we wanted to do was slob around the house for a few hours.

The upshot for me was some good hobby progress. I have finished my box of Plastic Soldier Company Hanomags, and finished two squads of Panzergrenadiers to travel in them.

I'm pretty pleased with the Hanomags. Following Thomas' suggestion I tried to make these dustier looking than my Panzer IVs, adding a drybrush of Vallejo US Field Drab mixed with Buff. What do you reckon? Sugguestions gratefully received. Oh, and as mentioned in the Kursk Project Part 4, I know the Stummel is wrong, which is a shame as it looks quite mean, I think.

German infantry Squads in Battlegroup Kursk are made up of 8 men - a three man LMG group and a five man rifle group. These teams are activated separately, so I have put them on separate bases. The rules require individual figure removal as casualties, but I will keep track of this with counters as they just look too tiny to base as individuals. I have decided to put them on irregular shaped bases, which I'm thinking will be the standard for Project Kursk. What do you reckon? 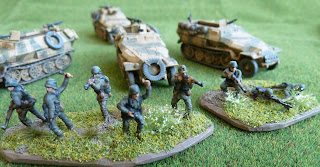 These are the first WWII figures I've ever painted in 15mm, and I have some doubts about whether there is enough colour contrast. Any suggestions about how I can paint them better (but still quickly!) appreciated. In particular, what do you 15mm grognards do when you are painting the Zeltbahn tent quarter in this scale? Also, what do you think of the base colour? I've used Tamiya Flat Earth with some Dark Yellow added to lighten it a little.

The PSC German infantry were quite nice to paint, but some of the detail is so fine that I only really figured out what I was painting as I went along. In particular, I realised that the bloke walking along holding on to his shoulder straps is actually a medic, as he is carrying a large medical kit with red cross on his back. However, by the time I realised this I had already given him a slung rifle. Some of the soldiers' kit looks a bit dodgy, with water bottles and entrenching tools generally on the non-regulation side and gas mask cylinders in all sorts of odd positions. The proportions and anatomy however are terrific.

A few more infantry and I'll have enough of a basic force to switch to the Soviets. 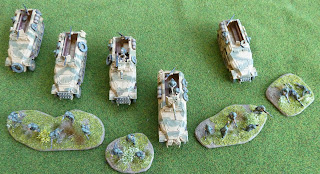 Posted by Dux Homunculorum at 1:33 AM