I've always quite fancied the German Sdkfz 251 halftrack (aka 'Hanomag'). I remember about 20 years ago cutting my thumb to shreds trying to cut open the vision ports on an Esci Hanomag, and buying the Squadron/Signal book 'Sdkfz 251 In Action' with the aim of making a model of every variant. I think I actually made about four. Then about ten years ago when I got back into wargaming I bought a couple of Hasegawa 251 ausf. Ds, and very nice they are indeed.

It was therefore with a certain nostalgia that I opened up a box of 15mm Plastic Soldier Company Sdkfz 251 ausf. Cs. For my own battlegroup I bought one of PSC's Kursk starter deals, which gave me a couple of boxes of halftracks as well as two sprues from their conversion kit, which allows you to make the Sdkfz 251/2 (mortar carrier), 251/9 ('Stummel', with 75mm gun), 251/10 (platoon commander's vehicle with 37mm Pak 36) and the 251/16 (flamethrower). Although War and Peace Games don't actually list this deal on their website, Ian was kind enough to put the package together for me, and it is good value.

I'll come back to the conversion kit in a moment, but first, here are some thoughts on the basic 251 C kit.

I was certainly very impressed with the PSC models of the Panzer IV, but I'm completely gobsmacked by the 251s. These are terrific little kits that fit together simply and perfectly. There are some particularly clever design features that allow the complex shape of the 251 to be modelled accurately, with the bottom of the crew compartment modelled separately from the chassis and fitting snugly into it. This image might show what I mean, as well as showing the instructions that come with the kit. 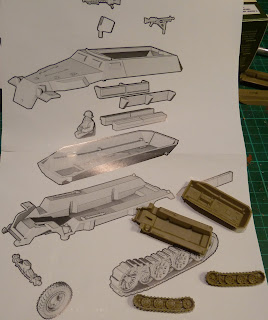 The 15mm box contains five vehicles, with seven crew for each - a driver and co-driver, a gunner on the forward MG34 and four other seated Panzergrenadiers. In a nice touch, the forward MG is moulded as part of the gunner figure, but a separate weapon is also included if you do not intend to model the vehicle in action. A good amount of stowage is also included, with spare track links, infantry packs, a tarpaulin, jerrycans and a spare tire to festoon each halftrack with.

I really can't recommend these highly enough. The only minor quibble I have is that there are a few sink marks from the mould on the floor of the crew compartment.

The conversion kit from PSC is designed to fit their ausf. D halftracks. Ian from War and Peace Games warned me before I bought it that some pieces would need some trimming to fit the ausf. C, and he was right. In particular, the interior detail for the 251/9 'Stummel' didn't quite fit the more complex shape of the C version of the halftrack, so be prepared to deploy a sharp knife. However, there is a more fundamental problem. As far as I know, the 251/9s built on the C chassis of the Hanomag always had the gun mounting countersunk into the front of the vehicle like this: 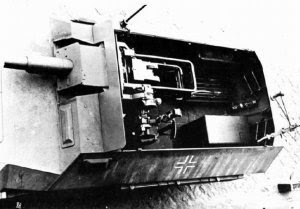 It was only on the later D chassis (and only partly through the production run) that the simpler mounting as featured in the kit was produced: 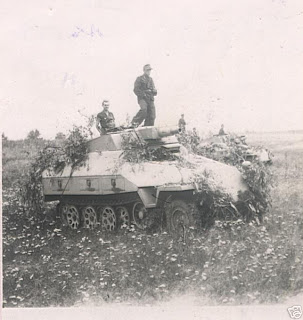 I only remembered this after I had assembled my 251/9, so I am going to have to turn a blind eye to the fact that my battlegroup will contain a vehicle that never actually existed. Be aware therefore that although PSC include these conversion parts in their Kursk deals, some compromises are necessary if you want to use them. Only 251 Cs were used at Kursk, but some of the conversion parts are only accurate for the 251 D. To be fair, PSC only suggest you make the /2, /10 and /16 in their description of the Battlegroup Kursk Panzer starter deal, but it is up to your own nerdy knowledge to realise that you can't use the conversion kit to make a 251/9 ausf. C. Damn.

I also have a couple of other quibbles about the conversion kit. The barrel of the Pak 36 is over scale, appearing to be at least the same calibre as the 75mm gun. It is also a shame that there are only single figures provided for operating the guns on the 251/9 and /10, when each would need at least a couple of crew. For my 251/10 I used a MG gunner from the standard kit, trimming away the machine gun so that he appears to be operating the Pak gun.

Finally, here are the five halftracks primed and ready for painting. I'll be painting the interiors before assembly. Buy some, they are great!
Posted by Dux Homunculorum at 3:55 AM