Well, I'm back from Cadet camp and the term has ended, so am now on holidays. As usual, I hit the wall, and have spent the last couple of days being exhausted and foul tempered with everyone.

The holidays mean that not much will happen with the school Kursk project until February, but I'm hoping to start the year with a couple of small battle groups of my own to use helping learn the rules with the boys at school (and anybody else who wants to play with me (Paul!) 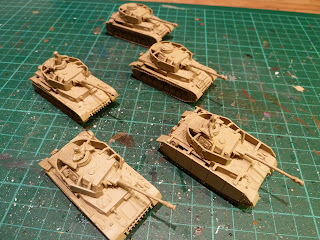 First up, I've whacked together a box of 15mm Panzer IVs from the Plastic Soldier Company. I'm really impressed with the kits. The engineering on them is brilliant - all the pieces fit together very well, and there was practically no flash (just a tiny bit on a couple of the tracks). The tracks can be a bit fiddly. I recommend attaching the running gear to the hull, then sticking on the top track section, then the bottom, without worrying too much about the perfect placement. Then, when the glue is still setting, add the top halves of the drive and idler wheels. This fixes the track into place.

One small criticism of these kits that I do have concerns the instructions. For a beginner, I think the single exploded image of the kit would be quite confusing, and there is no guidance given for the location of some small parts such as the storage bin for spare wheels, even though this was standardised on the tanks. Similarly, the instructions give the impression that Schurzen were only carried by the Ausf. H version of the Panzer IV, although the Ausf. G also often wore them. For such lovely kits it is a shame that they are not made a little more accessible to newbies, with some clearer assembly and painting instructions. It is also the case that there are some small inaccuracies resulting from the attempt to fit all versions of the Panzer IV from Ausf. B-H in one box. In particular, the commander's hatch is wrong for the Ausf. H (it should be one piece).

After assembly I sprayed the kits with Citadel Skull White, then Tamiya Light Yellow. I usually would have used XF60 Dark Yellow, but I'm working on the theory that the slightly lighter shade might work better when I put a coat of shading over it. We shall see.

Anyway, these are the first WWII kits I've started in about 8 years, so I'm having fun.
Posted by Dux Homunculorum at 1:45 AM