I've completed my first five Panzer IVs from Plastic Soldier Company. As I said in a previous Kursk post, I'm very taken with these little kits. They go together beautifully, and I'm pretty pleased with how they turned out. After undercoating in white and then spraying with Tamiya TS-46 Light Sand, I added the camo with some Gunze H-303 Green that I happened to have lying around. In the absence of an airbrush, I painted on the swirls with heavily thinned paint, then went over parts of the pattern with paint straight out of the jar to give the effect of sprayed-on camo. The shade of green seems pretty right to me, although the paint is a horrifying semi-gloss that only looks ok after spraying it with matt varnish. 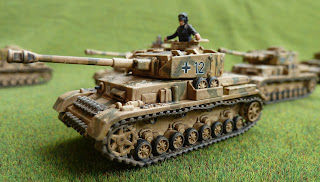 Before adding the varnish I painted over the tanks with my acrylic wood stain Ersatz Army Painter to darken the yellow, add shadow and the suggestion of dust, then just did a bit of highlighting to finish off. The shading was an experiment, but I think it worked prety well. I'm aiming for simple with these, partly because I don't adore painting tanks and partly to come up with some good shortcuts for the boys at school.

I finished them off with decals from Plastic Soldier Company for the 11th Panzer Division at Kursk. The decals were lovely, by the way. At school we will mainly focus on the Gross Deutschland Division, but my personal force will be from the 11th Panzer. One thing I did do was trim the three digit turret number to two digit. This is where my obsessive compulsiveness comes out - I read somewhere that the 11th Panzer used 2 digit numbers, the first indicating the platoon, the second the vehicle within the platoon, but dispensing with the usual first digit that indicated the company. So all my tanks are from the 1st platoon, except for the one with Schuerzen marked 01, which is supposed to be the company commander's vehicle. I tried to check this on the net, but was amazed to find that Google let me down. Surely if the internet is good for anything it is good for people to share their exhaustive research into German vehicle numbering. I did find some photos of tanks from the division from 1940-41 with double digits, and so I'll assume they still used this system at the time of Kursk. If anyone knows definitively whether this was the case, please let me know! And yes, I'm aware I am a sad, sad man...
Posted by Dux Homunculorum at 10:05 PM