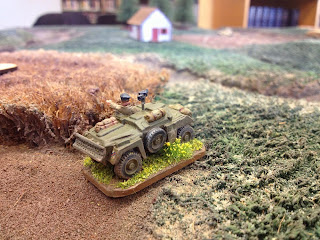 I had a break from a horrible weak of exam marking yesterday afternoon by playing a game of Battle Group Overlord with the school wargames club warlord. We played a 500 point game of the Flank Attack scenario, and for me it was a chance to get my Brits on the table for the first time. My Battle Group was made up of:

An infantry platoon
A troop of Churchill VIs
A Churchill IV
2 Achilles Tank Destroyers
A Humber Scout Car
2 Ram Kangaroos
A battery of 2 4.2" mortars off board
A pre-registered target point

This force cost 503 points. gave me a Battle Rating of 30 and two officers.

As usual the game was a complete blast, and played very differently to the Kursk games we are used to. The Brits required much more careful combinded arms actions, with the movement (slow!) of the Churchill covered by the tank destroyers and much more aggressive use of infantry. I used my pre-registered target point to target one of the objectives, so had fun mortaring the Germans when they moved up a couple of halftracks to take the objective. 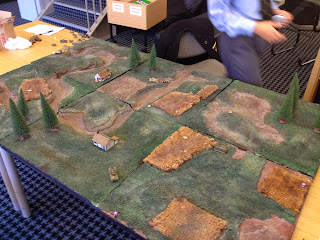 The gods who look after the taking of random Battle Counters were definitely on my side in the game, with the Germans managing to lose a tank to a mine strike and another to a breakdown. I almost felt sorry for them. Naaaaaaaah. 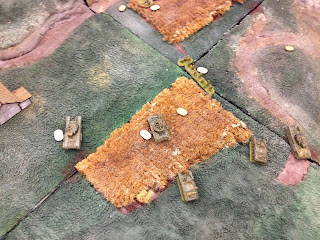 This was also a game that really demonstrated that pinning units with area fire is just about as effective in Battle Group as actually destroying units. In the end, we had to call the game due to time, with my Brits way ahead in victory points, so that's one game out of one for the 6th Guards Armoured Brigade and 15th Scottish Infantry. 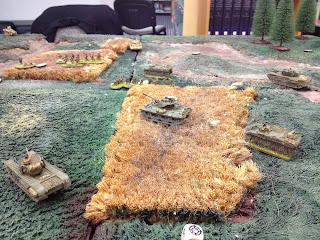 Battle Group is such a great set of rules! I've never had a game where I haven't found myself thinking back over the action and remembering the highlights. 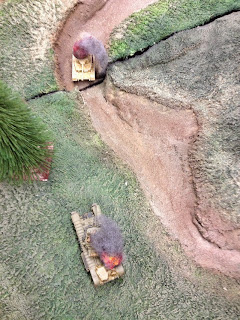 Posted by Dux Homunculorum at 4:44 AM