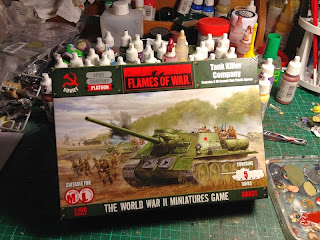 I'm not generally a fan of Flames of War minis. Not that I have bought many at all, having usually been put off by the price, so I usually only resort to them when I need a specialist vehicle or two.

However, I was tempted by these. One of the great side effects of the glory that is the Plastic Soldier Company is that they have obviously scared Battlefront quite a bit. Far be it from me to suggest that Battle Group books should have 'The MUCH BETTER World War II Miniatures Game' emblazoned across the front in large letters. That would be churlish. It is great to see though that Battlefront are starting to embrace plastic kits. Partly out of curiosity, I picked up a box of their plastic Soviet Tank Killers. Partly out of curiosity, but also because it is actually going to require little effort to turn my force for Battle Group Kursk into a Soviet army for Fall of the Reich. All I really need to do is paint all the alternative T34/85 turrets that I still have in a box, buy a box of the new PSC IS2s, and get some tank destroyers, where is where this box set comes in. Actually, I reckon PSC really missed their chance on this one. Since they already had their T34 box, it can't have been too much work to have turned it into a release of SUs ready for Fall of the Reich, but Battlefront got there first with this release for Flames of War. 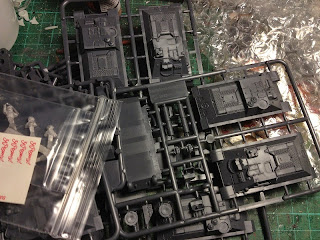 The box follows a similar format to PSC, offering five complete vehicles. They cost more, $55 AUD compared to about $42 for an equivalent PSC box, but they do include decals. The sprues allow different options to build five complete SU-85s, SU-100s, SU-85Ms or SU-100Ms. Metal commander figures are included along with decals, but no instructions, so a glance at some photos might be in order if you don't know which way round the exhaust pipes go or how the top hatches open. 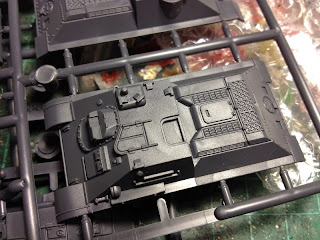 These are lovely kits. The armour surface has a great slightly rough surface, and all detail is beautifully defined. I have put together one SU=85 so far, and everything fitted perfectly. Very impressive, and I think they will look even better with the addition of a bit of clutter and stowage. 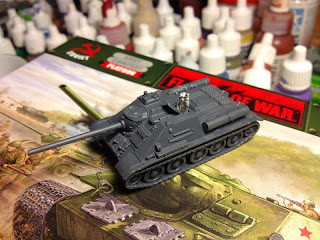 All up, this box set gets a couple of thumbs up from the Dux, and I think this should be popular with BG players wanting to build a late war Soviet force. Kudos to Battlefront for being inspired by the Glory of PSC (see what I did there?) and I'm looking forward to seeing more new plastic goodies from them.
Posted by Dux Homunculorum at 3:34 AM