Universal Carriers and a Crab 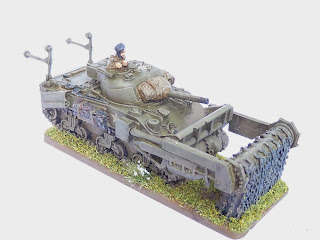 My 15mm British force for Battle Group Overlord and Fall of the Reich continues to grow. Plastic Soldier Company taunted me with the release of their lovely 1/72 Universal Carriers to the point that I found I couldn't wait for them to come out in 15mm, so went ahead and bought a set from Forged in Battle. 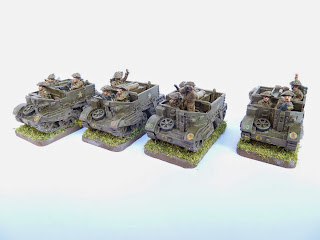 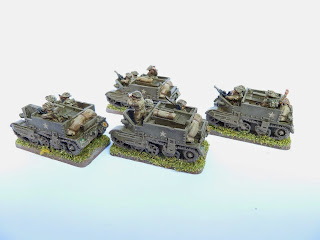 These are pretty nice little resin kits, but I was a little disappointed that they only came with a couple of crew figures. I added some, especially the Bren gunners, from Skytrex, but they don't really fit as well as I'm sure the PSC ones will WHEN THEY GET AROUND TO RELEASING THEM! Sorry...I just really like Bren Carriers. 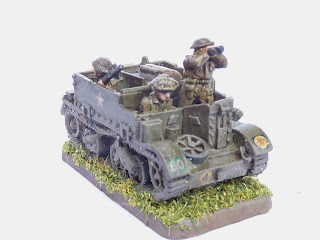 Like all the infantry units in my battle group, these are painted as belonging to the 9th Cameronians Battalion from the 15th (Scottish) Division. 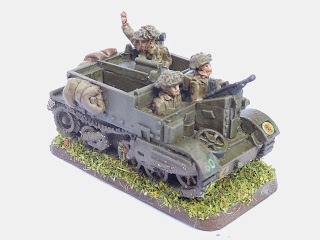 Also from Forged in Battle is this Sherman Crab from the 79th Armoured Division. The kit is made from resin and metal, and was a bit of a bastard to put together without consulting photos. Some necessary shortcuts are taken with the moulding, for example sculpting the flails as a single block of resin that makes it look as though the flail chains were far denser than they actually where, but the finished beast looks pretty good, I think. 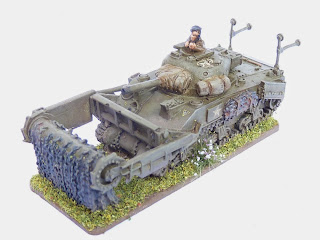 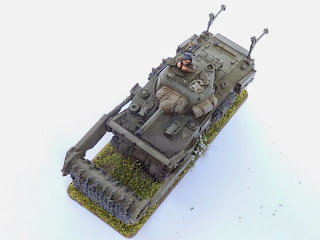 Probably the turret should have large numbers in red, edged in white, but I don't have anything suitable and don't want to chance painting them freehand. They might be something to add in the future. 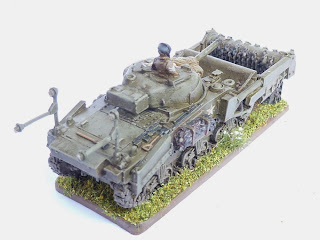 I'm looking forward to trying this out in a scenario attacking a German defensive position. Now, where can I get a 15mm Churchill Crocodile....
Posted by Dux Homunculorum at 9:03 PM