Chris was asking about the different T26 models that appeared in my epic Tanktober undercoating effort, so here's the explanation and comparison.

The centre model is a T26 (1933) from the Spanish company Minairons, the other two are by Zvezda. The tank on the left is a T26 (1939), and the one on the right is an OT-26 flame thrower tank. Since I'm making a company of 17 T26s for Battle Group Barbarossa I wanted some variation in the unit, which is what you would have expected to see in real life. 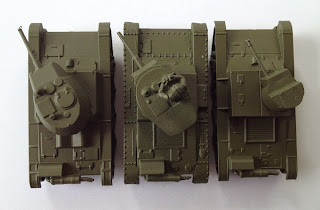 Dimensions-wise, the kits from the two manufactures mix very well, being identical in length although the Minairons one is a teensy bit wider, but nothing that will be noticed on the table. The great advantage of the Minairons T26 is the separate commander's hatch,and inclusion of a commander figure, although the commander in the picture here is actually from Plastic Soldier Company.

Both models are simple to put together, and if you plan to mass produce a unit of 17 tanks these aren't an arduous type to choose! The Minairons detail is not as sharp as that from Zvezda, which is most noticeable on the running gear, but both kits are strongly recommended to mix together in the same units.
Posted by Dux Homunculorum at 8:03 PM