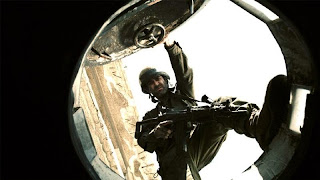 The Tanktober film festival continues with a look at Lebanon (2009), directed by Samuel Maoz, and the first Israeli movie to win the Leone d'Oro at the Venice Film Festival. The movie follows a crew of young Israeli tank crewman during the first day of the 1982 invasion of Lebanon. The action focuses particularly on the gun aimer Schmulik, and draws heavily on the experiences of Samuel Maoz himself as an army conscript in 1982. Schmulik's tank (a Sh'ot, or Israeli Centurion) is operating in support of a unit of paratroopers during the film as they work their way through a heavily bombed Lebanese town. Perhaps uniquely, the entire film is set inside the tank, which becomes steadily more grimy and claustrophobic as the story progresses. The only time we ever see what is going on outside is through Schmulik's gunsight, with every pan or zoom being accompanied by the hydraulic whine of the tank turret rotating.

Often harrowing, the movie doesn't really add much to the well worn themes of the impact of war on the young men who have to wage it, and the terrible things they do. On the other hand, Maoz said of the film that 'I'm trying to explain that war cannot open for you the option to be moral.' Pondering this central idea preserves Lebanon's relevance.
Posted by Dux Homunculorum at 4:51 AM