Happy Tanktober everyone! This month I shall be giving my OCD free reign to obsess over all things armoured. I shall be painting many tanks, probably sharing the odd story or interesting fact about tanks, particularly over on Facebook, and I will be having a bit of a film festival of movies set entirely or mostly inside tanks. Or at least ones where tanks feature prominently. Any suggestions are welcome. I blame the good people responsible for the Battle Group rules and Will Townsend at the Plastic Soldier Company for fueling this madness.

I'm certainly not short of some assembled tanks to get the ball rolling this month. 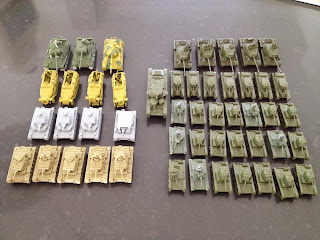 To start with, today I undercoated a bunch of early war Soviet armour today for Battle Group Barbarossa, including over a company of T26s and over a platoon of BT7s (the excess likely to end up in a Finnish army), along with a monster T35, all from Zvezda. 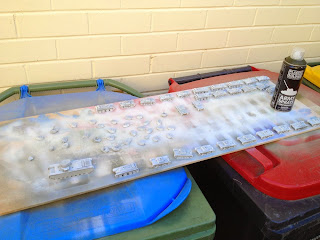 Usually I would have gone out of my way to individualize the vehicles with stowage etc, but looking at photos from 1941 I can't find too many that show T26s of BT7s carrying much extra kit. I suppose much of the time they just didn't last long enough for their crews to accumulate any. Does anyone have any thoughts on this, or photos that show the contrary? 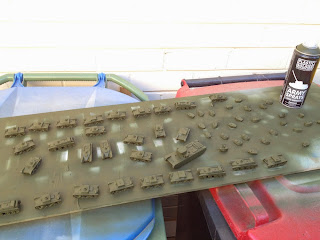 I was greatly assisted today to get everything undercoated with a can of the PSC Russian armour spray paint. Usually I have used Tamiya Olive Drab 2 as my base Soviet armour colour, but I'm very happy with the switch to the PSC paint. It certainly pays to take the instructions seriously to use several thin coatings, as the paint does cover quite thickly if you spray too closely. Conversely, this means that if you give the model several light coats the surface ends up with quite a nice texture. As usual, the shade is really too dark for 15mm, so dry brushing on some lighter coats will be necessary to allow for scale effect. One other minor thing I noticed about the PSC paint is that it seems to be under less pressure than, say, the Citadel Skull White primer I was using. This is good news when it comes to spraying small objects like turrets that the Citadel paint was tending to blow all over the place!
Posted by Dux Homunculorum at 2:55 AM