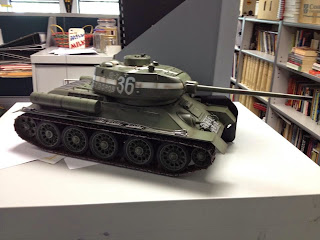 Tanktober is a magical time of year. Today I realised just how special it is. On Monday I went to Hobbyco in Sydney on a whim, strode purposefully into the shop and said 'I would like to get a remote controlled tank, preferably a T34.' The chap behind the counter said 'turn around - that came in half an hour ago'. Sitting on top of a bunch of shipping boxes was this beauty. I handed over $50, and took my pet back on the bus to his new home. He has accompanied me to school, and I'm enjoying taking him for walks.

Today, my friend Sian decided she wanted the Tiger I in the same series so we could have a battle (the tanks have infra-red guns in them). I rang up Hobbyco to see if they had one. The bloke I spoke to claimed the shop had never sold such a tank as the one that was sitting on my lap being patted while I spoke to him. Sian and I went to investigate instead of facing the horror of exam marking. Even in person Hobbyco claimed no knowledge that such a thing ever existed. 'No, we don't have those. We have some for $200 but they're smaller. We're not even sure tanks even exist. What's a tank? Who are you people? What do you want from us? Take some Lego and go, for god's sake, just go!' and so on.

Eventually it turns out that my tank was something a rep from the distributor had added to a shipment because it came from a shop that had closed down, and they don't even make these anymore, and certainly wouldn't for $50 if they did.

Or so they said.

But we know what really happened, don't we? The god of tanks has smiled on Tanktober, and given me this wonderful blessing.