So, got home last night, got the kids to bed, and settled in for a good evening of painting Vikings and drinking beer. Ended up glued to the telly watching the Royal Wedding with the Duchess. (Our invitations to Westminster must have gone astray). Such a magnificent spectacle, watching the Horse Guards trot down to the Palace. And I quite liked the dress. I have very strong childhood memories of Charles and Di's wedding, which probably helps to explain my surprising lack of cynicism. Good luck to them.

In other news, my Medieval Germans brought me victory against an early Imperial Roman Army at the school wargames club last night, breaking my unbroken record of catastrophic defeats. A good Friday all round.
Posted by Dux Homunculorum at 3:01 PM 3 comments: 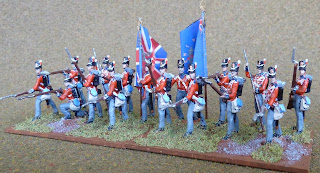 Next, the 1/ and 2/95th Rifles, also from Revell. This is one of my favourite sets of figures.

The 71 (Glasgow) Light infantry, from the disappointing HaT set, along with some figures from A Call to Arms and a converted Esci bugler.

And one of my favourite British regiments - the 52 Oxfordshire Light Infantry.

As always, click to make 'em bigger. Thanks for looking!
Posted by Dux Homunculorum at 2:31 AM 10 comments: 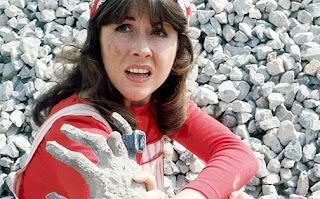 Very sad to hear this week of the death of Elisabeth Sladen. I've been feeling quite gloomy about it today, remembering the sheer childlike joy with which I used to watch her as Sarah Jane Smith, the first real Dr Who companion I have clear memories of. So many great moments glimpsed from behind the sofa, as the Doctor and Sarah Jane battled with Daleks, Cybermen, Eldrad, Sutekh, the Giant Robot... So here's to Elisabeth Sladen for enriching my childhood, and I suspect that of many others as well.
Posted by Dux Homunculorum at 1:09 AM 4 comments:

Brian Blessed and his fellow Vikings deserve some worthy opponents, so I bought a box of the new plastic Gripping Beast Saxon Thegns from the excellent chaps at War and Peace Games.

For those interested, here are a few pics of some assembled figures. 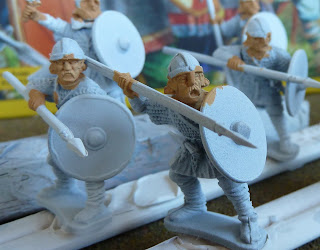 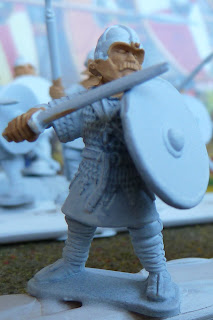 I was interested to see how they compared to the Wargames Factory thegns. Mostly, all of Nedoreth's comments in his excellent comparison of GB and WF Vikings apply. The GB figures are easier to put together, but probably lend themselves to a more limited number of poses (they are made to represent a shield wall, after all). In height, the figures from both companies are a perfect match, although in proportions the GB blokes are noticeably more beefy and have bigger heads, with loads more individual character than the WF figures and impressive mustaches. The GB weapons are of the exaggerated proportions many expect, although not to ludicrous GW extremes. The WF spears and swords do look a little puny in comparison though.

The GB figures are very much aimed at representing the 'middle' Anglo-Saxon period (8th-10th centuries). Some of the helmets included really belong to the 8th century or earlier, especially those with boar crests or cheek pieces. There are no kite shields or two-handed Danish axes, so they aren't really suitable for Hastings by themselves. In contrast, WF include some kite shields and even a head with a mail coif under his helmet, so they work for the 11th century.

I tend to prefer the GB figures, despite the slightly exaggerated proportions. They really look the business, and fit together well to form an impressive shield wall. I also think the mail shirts on the GB figures are more convincing, with very tight sleeves on the WF figures. To get a sense of just how good the GB Saxons can look together, check out the photos of the Battle of Maldon game from Salute over at The Man Cave. (Brilliant blog, by the way). Certainly it is quite possible to mix in the WF figures to give more variety, and they would probably be better for representing charging or skirmishing figures. Here are some comparison shots.

GB on the left, WF on the right. 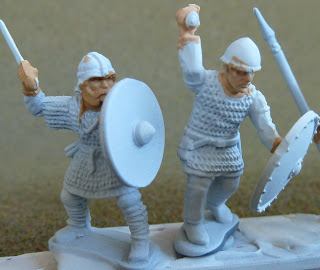 WF on the left, GB on the right. The angle of the photos makes the WF figure look taller, but they are the same height. 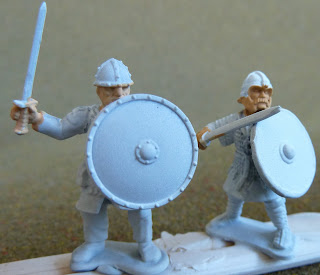 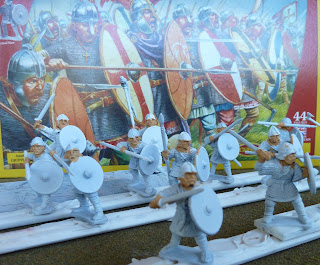 So, more painting to do as the 28mm Dark Ages bug turns from a whim to a couple of major projects. And then there are the Normans from Conquest Games... bugger. It's funny that the first army I ever painted were 15mm Normans, and I keep coming back to them in every scale I do.
Posted by Dux Homunculorum at 5:15 PM 2 comments:

Five Reasons I Know Basic Impetus is a Brilliant Game...

1. I have rebased a DBA army for BI. Rebasing miniatures is hideous, and I have usually avoided it. But here they are, my new 13th Century Germans, consisting mainly of the forces of the Archbishop of Cologne with Emperor Frederick II along for the ride. I painted these ages ago, and they have been on the blog before in their DBA guise. Not the best painted minis in the world, but I like them.

2. The rules have taken off at the school wargames club. I could never really get school students interested in DBA. I think those who have grown up with Warhammer think you need to roll handfuls of dice for it to be a fun game. Well, with BI they can.

3. My great friend The Nameless One judges it to be 'a really fun game'. This is from a man who grunts noncommittally whenever I try to get him to play DBA or anything else for that matter with me. He is also the Lord of Ten Thousand Half Painted Armies. Who knows? Inspired by BI he might even finish painting one. But let's not get carried away.

4. I played a game with my friend Antonius last week, and he is inspired to paint up a Spartacan army as a result. This is astounding. Antonius is a fantasy gaming tragic, who has been known to deploy Orcs along with Napoleonic French infantry. If a historical game captures his attention, it must be good.

5. I keep enjoying it even though I am almost invariably flogged. Last term at the school club my Parthians were regularly defeated by various thirteen year olds. Hence my thinking that I would start afresh next term with Medieval Germans. Last night I had a game with Paul the Galloglaigh, threatening the Germans with Melting By Candle if they didn't perform. Well, it was close, but Paul's Mongols narrowly defeated me, largely as a result of some clever deployment that left my victorious units of knights isolated. That and my now famous appalling luck with dice.

So there we have it. Basic Impetus is a great game. Most of all, it is fun. I now have a copy of the full Impetus rules, and I can see that they would provide a much richer game as well.

And if you are wondering, I'm giving the Germans another chance....
Posted by Dux Homunculorum at 8:17 PM 2 comments:

Vikings for Basic Impetus - the Bondi

The last few weeks have been crap and everyone has been sick, so apologies for the lack of blog action. However, amidst all the mucus the Viking army for Basic Impetus continues to grow. Here are the first two units of Bondi, also from Wargames Factory. Click on the image and it will grow magically larger before your eyes.

And Mike - I reckon this bloke looks particularly like Brian Blessed :). 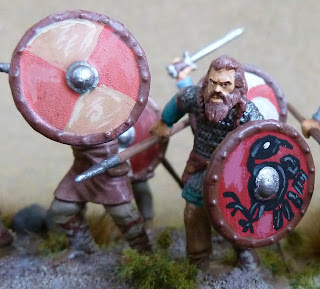 Posted by Dux Homunculorum at 2:49 AM 7 comments: