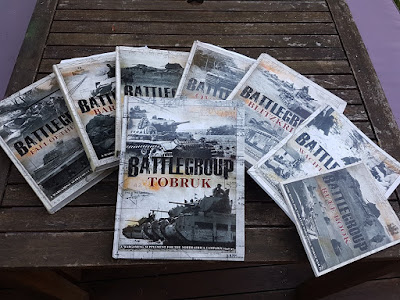 Pavlov's dogs, famously, were conditioned to salivate when hearing a bell which they associated with food. I have been similarly conditioned to associate any new release from Battlegroup with hours and hours of fun to be had. Indeed, whenever a new title is announced I automatically reach for my wallet, and I think I would even preorder a copy of Battlegroup The Great Emu War of 1932 if it existed. The latest title from the prolific Messrs Warwick Kinrade and Piers Brand is the long-anticipated Battlegroup Tobruk, and on first inspection it might just be my favourite title yet. These are some of my first impressions after a quick read-through.

I have to thank gaming buddy, tops friend and allround excellent bloke Paul O'G for my copy of the rules. Mine is no doubt waiting for me at work for when I return on Wednesday, but Paul very kindly handed his over while we were drinking beer and eating Serbian sausages on Saturday night. He wants my new copy, not his one back, I think because of the drool. Paul and I have been eagerly anticipating these rules for a couple of years.

Firstly though, a reminder of what Battlegroup has to offer. Tobruk is the 8th title in the Battlegroup series from Iron Fist Publishing, which along with a core rule book features supplements for the Blitzkrieg campaigns of 1939-40, Barbarossa, Kursk, Normandy, the Ardennes and the Fall of the Reich. The core Battlegroup rules are rock solid, and by far my favourite set of rules for WWII games. You can read an overview of my general impressions here. These are not rules for campaign gamers, and if your idea of fun is to have five Sturmtigers and a battalion of Tiger IIs on the table you will be disappointed. Likewise, if you are hoping that your cunning use of points will give your Volkssturm a crushing victory over Zhukov's tank armies, you may find these rules frustrating. There is Another Game to scratch those itches if you have them.

What distinguishes Battlegroup is that the rules are strong enough that with a small amount of tweaking the authors are able to convey the very specific flavour and particular challenges posed by different forces at different stages of WWII. A Soviet tank force from 1941 will feel totally different to their French counterparts in 1940, and the challenges such forces pose to you as the commander are not just due to differences in equipment. If you are prepared to countenance asymetrical games that conveys a powerful sense of different theatres of war, and if a great gaming experience is more important to you than winning and losing, then Battlegroup may well be a set of rules for you.

On, as Rommel may have said, to Tobruk. In keeping with its predecessors, Battlegroup Tobruk (BGT) is a sumptuously produced and illustrated hardback volume, weighing in at about 200 pages. Its scope is unashameably modest, covering the desert war from around Operation Compass in late 1940 to the aftermath of Operation Crusader in late 1941. There is also a separate section dedicated to Operation Mercury, the German invasion of Crete in May 1941. Everything is very well laid out, with only the odd trivial typo. One bonus compared to previous volumes is that BGT comes with a series of handy data cards, enabling you to keep track of vehicle stats during a game with minimal flicking through the rule book. For those unfamiliar with Battlegroup, I should also point out that this is not a complete set of rules, but requires you to have a copy of the core rule book as well. One of the delights of BGT is that Kinrade and Brand can really write. They provide a very readable narrative in the book that explains the confused desert fighting of 1941 with great clarity, and it is clear that this is a historical period that they know a lot about and have great interest in. A number of specific units such as the Australian 9th Division and the Italian Ariete are described in some detail, and the authors also discuss some features of the desert war such as whether it was indeed a sideshow. The overviews of each of the armies involved are also great, and to get some further insight into the authors' thoughts on designing the Italian army lists in particular, I recommend you listen to an interview with Piers Brand on a recent episode of The Brit, the Yank and the Hobby podcast. 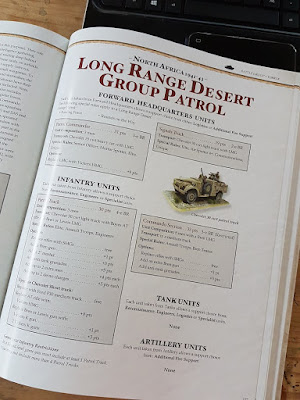 Apart from unit organisations, a number of specific new rules locate this game firmly in the desert. For example, there are particular rules to represent communications problems, wear and tear on vehicles and fuel supply, while my favourite new rule introduces the very real problem of dust and thus visibility becoming a greater problem as a battle progresses. Army lists cover British Infantry and Armoured Division battlegroups (which include other Commonwealth forces), Italian Infantry and the Ariete Armoured Division, and of course the Afrika Korps. Lists for small raiding encounters between the LRDG and Auto Saharana have already had me drooling and looking for suitable models. The section of the book focused on Operation Mercury covers German Fallschirmjaeger and CREFORCE, including Commonwealth regulars, Greek infantry and Cretan irregulars, who should scare the German player quite a lot.

As always in Battlegroup, BGT includes a number of scenarios, including an airlanding scenario for Crete that Mr Brand cheerfully admits that the German player is grossly unlikely to ever win. A real bonus is a short campaign for an attack on Tobruk itself, which looks very interesting. 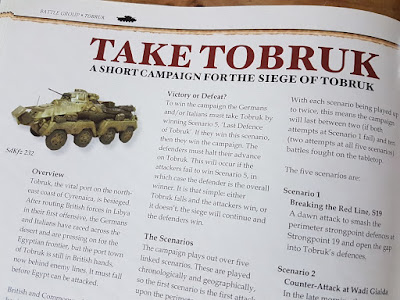 There is so much to like in BGT, and almost nothing I can find to quibble with. A map would have been handy to support the excellent narrative on the invasion of Crete, but the main absence that I mourn is a hobby section. Mr Brand is a great painter, and it is a shame that the book doesn't include a section that, say, gives tips on what desert yellow to use for British, Italian and German vehicles or explains how to paint the dreaded British Caunter camouflage scheme. Having seen some of his painted DAK vehicles, I particularly would have like a feature on how Mr Brand creates the effect of desert yellow painted over Panzer Grey. Unfortunately though, I suppose such sections would be the first to go when a book is struggling to stay within its word limit.

Congratulations to Warwick Kinrade and Piers Brand on another fantastic book that is going to take up a lot of my (and Paul's) time and money in the months to come.
Posted by Dux Homunculorum at 11:21 PM 8 comments: