Last night I fiddled about making a banner for my new Breton warband, and here's the result. It is supposed to evoke the Miracle of Nantes, one of the 'abilities' of Alain Barbetorte in Northern Fury. I just painted it freehand, basing it it on the depiction of Mary in the Book of Kells. The face is a bit rubbish, especially on the left side. I'm thinking this will give the flag the name of 'Our Slightly Man-ish Lady of the Perpetual Five O'Clock Shadow'. Above all, don't look too closely at the knotwork border. I made a complete pig's ear of it, but from a distance it looks ok.
Posted by Dux Homunculorum at 6:18 PM 4 comments:

Dan over at Gunner's Wargaming has a brilliant competition going to celebrate his birthday. Check out the details here, but feel free not to enter, cos I want to win. If you do, you had better be quick: entries close in about 26 hours Sydney time!
Posted by Dux Homunculorum at 5:13 AM No comments: 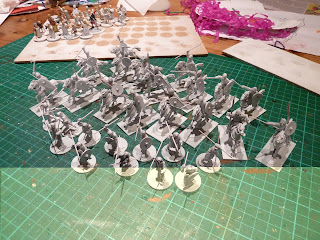 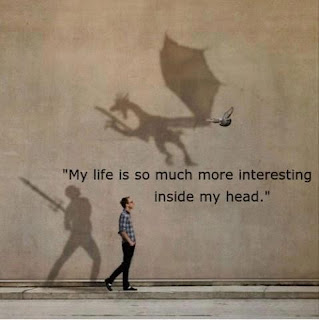 Posted by Dux Homunculorum at 1:57 AM 4 comments:

I'm sure someone can help me with this. Suddenly, whenever I visit someone's blog and want to follow it, the 'Follow' button has inexplicably vanished from the top of my page. Does anyone know how to fix this? Also, whenever I write a post now with photos, the images get inserted into the text weirdly so that fragments of sentences appear here and there (see my last couple of posts). Why???
Posted by Dux Homunculorum at 1:43 AM 8 comments: 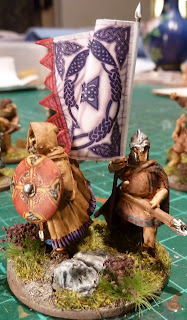 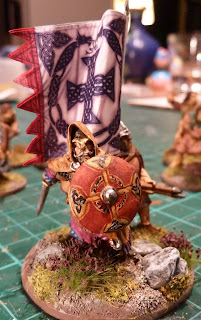 All the figures are from Westwind's Pictish range. I love the command figures, although I'm less enamoured with the levy. They're ok, but some detail is a bit soft and a couple of garments don't make any sense to me (those worn by the standing firing archers). I also wish the pack came with a greater variety of heads - all the included heads were bareheaded, instead of the really nice hooded heads Westwind do. Maybe they would respond to requests to put in a mix? Who can say? While we're on Saga, had a great game at the school club last Friday involving 6 points of Bretons vs a combined force of 4 points of Welsh and 4 of Scots, on a really big board. The Bretons were outnumbered, but gave us heaps of trouble riding around and avoiding contact. They scared my Welsh boyos quite a bit.
Posted by Dux Homunculorum at 12:36 AM 8 comments:

Daily life in the Danelaw 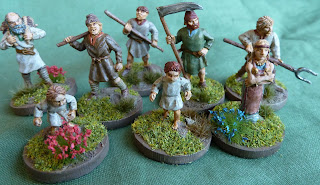 2012 is very much shaping up to be the Year of SAGA here at Homunculorum Towers. The 1/72 English Civil War homunculi look reproachfully at me whenever I catch their eye(s). Along with the love of Saga has come the desire to make nice terrain of early medieval villages etc, and they need to be populated. So I've started painting up some of the nice dark ages 'civilians' that are around. This lot is my first effort. Most of the figures are from Black Tree Design, with all the male adults from their feudal range. The young lady is a Gripping Beast Viking. Nice to paint something reasonably peaceful for a change, and certainly the first kids I've ever painted.

Posted by Dux Homunculorum at 12:52 AM 4 comments:

I've finished the four point Scots warband for Saga that I bought when the Northern Fury expansion came out. I spent a fair bit of time on the checked clothing and shields of these chaps, and I'm pretty pleased with the result. Good enough for the likes of me, anyway. So here are the warlords to lead them to glory (always handy to bring a spare warlord along as mine tend to die). 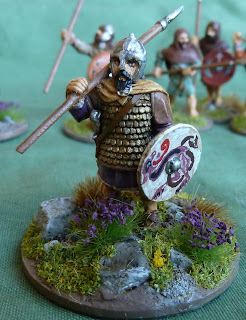 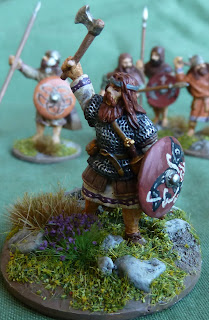 And the final seven warriors... 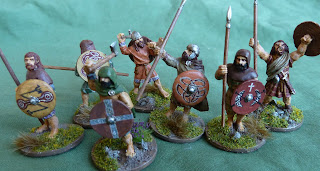 And here are the whole gang, ready for hijinks.

Freeeeedddommm!!! (God I hated that movie). 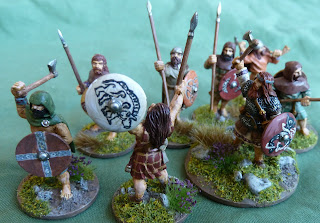 What next? Hmmm... Maybe another couple points of Scots? Or the Bretons I won? Or Huns? Choices, choices... No idea why the images are all over the place, by the way. Sorry about that.
Posted by Dux Homunculorum at 10:13 PM 11 comments: