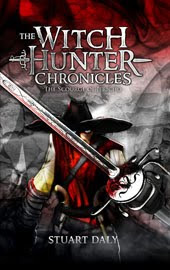 My mate Stu has previously appeared in this blog under two of his aliases 'The Nameless One' and 'Loathpa' ('Lord of a Thousand Half-Painted Armies'). Last year he happened to mention to me that he had been working on a series of books (!) and had a contract with Random House (!!). Most hilariously, for a man who famously refuses to read any books written in the first person it turns out he had written one.

Anyway, this is a shameless and unsolicited plug on his behalf, because the first book in the series ('The Scourge of Jericho') is out this week. It looks like his Witch Hunter Chronicles are going to be huge with their target market of teenage boys. I can't wait to read them myself, although I haven't been able to extract a copy from Stu. Stu has a great knowledge of the 17th Century, which is when he has set his books, and the stories of the Hexenjaeger ought to provoke some interest in the period from his readers. So if you know a teenage boy, or haven't grown up yourself, buy 'em a copy.

You can read more about the book here, complete with a photo of Stu looking like a big eejit.
Posted by Dux Homunculorum at 2:43 AM No comments: 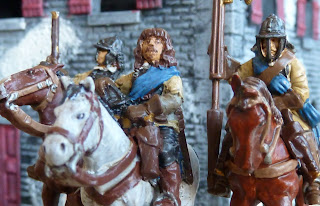 Along with my 10,000 other projects I have a great big pile of unpainted 28mm figures for the ECW. And now I've actually painted a few! These will probably be for a Scots Government army from 1648, as I have already made a few useful banners, and I quite admire the pragmatism of the Engagers. But back to the Normans for now...

Oh - and figures are from Warlord Games and Eureka. The Eureka figures are a little smaller than the Warlord ones, but the mounted troops mix well enough. The Eureka figures are supposed to represent Lord Gordon's Horse, who went over to join with Montrose's army. And very nice figures they are too, even though they seems to have switched sides yet again.
Posted by Dux Homunculorum at 7:27 PM 1 comment:

Just finished a first batch of Normans from the new 28mm plastic set from Conquest Games. These were lovely figures to put together. My only real criticism is the way that none of the kite shields in the set include bosses, and that there aren't enough kite shields for each figure to have one. I added some bosses by carefully carving some off the Wargames Factory Saxon shields, which was easier than I expected. 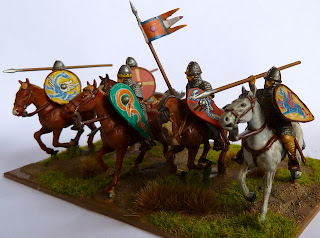 Figures are based for Impetus... 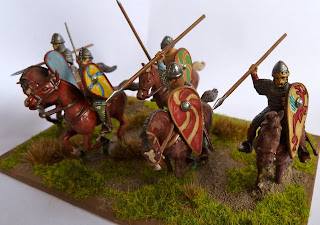 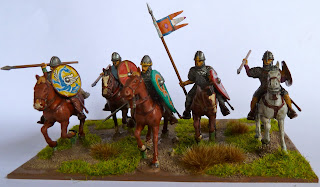 Each box of figures comes with one rather drmatic casualty figure, which I will use for disorder markers.

Posted by Dux Homunculorum at 4:12 AM 9 comments:

My twins are about 22 months old now and starting to speak. The Mini Duchess is saying 'daddy!' a lot, which warms the cockles of the old Dux's heart. However, she has also started 'identifying' me in all sorts of unlikely places. So far, she has pointed out a photo of Adam Spencer as me (which might mean something to you if you live in Sydney) and some random bloke in the park. The common feature seems to be baldness. This was brought home to me with crushing humiliation when she squealed excitedly, yelled 'daddy!' and pointed at a picture of Humpty Dumpty.