I painted some tiny little 6mm Covenanters. If you don't know it already you might be interested in following the tiny adventures of Man Cave Paul and I as we work on our ECW project over here.
Posted by Dux Homunculorum at 3:27 AM 2 comments: 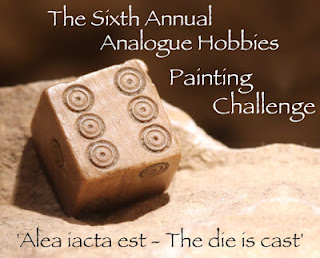 It's that magical time of year again when Curt announces the annual Analogue Hobbies Painting Challenge. I've put myself down for 1500 points in a moment of bravado, which is absolute madness given how much work I need to do over the summer holidays. The best thing so far though is that three friends from our gaming club (Odin's Night) have also thrown their hats into the ring, including Man Cave Paul after I bribed him with paint and lead. I'll have to set myself some clear project goals. 6mm ECW is certainly one, but maybe some early Saxons for Basic Impetus? A warband for Muskets and Tomahawks? 15mm Brits for the Desert war? Hmmm.....
Posted by Dux Homunculorum at 11:43 PM 2 comments: 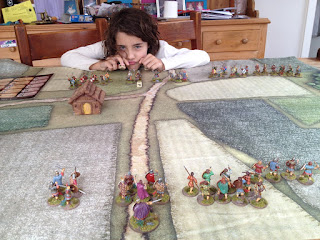 Last Sunday I played my first game of the full SAGA rules with my little Valkyrie. As some of you may know, I have been playing a few games with her using just the activation boxes from the SAGA battleboards and the fatigue rules ('SAGA lite') to get her used to the basic mechanics of combat and movement. On Sunday though we used the full battleboards, and I was really chuffed by how rapidly she grasped the concepts of having to make decisions about using dice for abilities vs. activation. 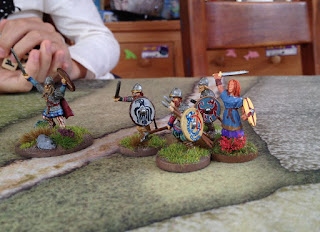 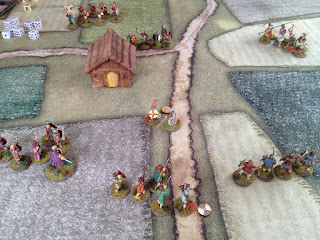 We played a sort of escort game where my Welsh were trying to get an important Viking prisoner across the table. Although I succeeded, the mini Valkyrie had the satisfaction of defeating my warlord, so she wasn't too put out. Her basic tactical ideas were really sound - she's going to be a formidable opponent! 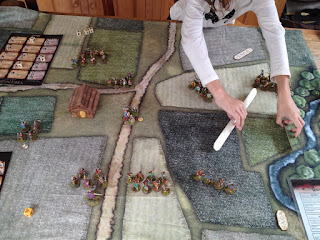 For me though the best bit was the way she used her model of a Valkyrie to escort each one of her fallen warriors to the pile in the corner. So cool.
Posted by Dux Homunculorum at 4:28 PM 7 comments:

This week I finished my Roman Republican army for the 2nd Punic War, the project I've been working on for the past 5 months. If you haven't been following my progress, the figures are based for Impetus and Sword and Spear. The legionaries are mostly from Agema Miniatures, with a few from Relic Miniatures added in for variety. Cavalry are all from Relic, as are some of the command figures. Most of the command figures are from Crusader, and the slingers are from Wargames Factory.

For a grand total of 193 infantry figures and 24 cavalry 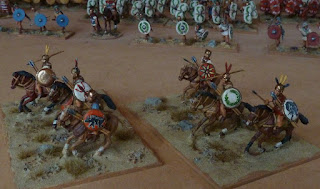 I've stayed very focused on these for the last few months, and so I'm itching to paint something different. With Paul of the Man Cave's imminent return to the gaming world it's time to make a serious push on out 6mm ECW project, although I've got a few gladiators to paint along the way. 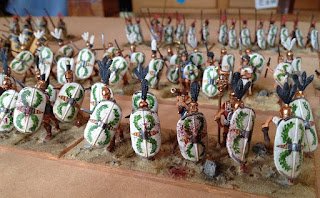 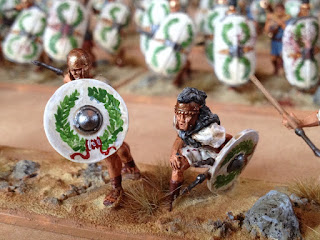 My Romans have seen two battles of Basic Impetus so far, and been victorious in both. Here's Steve looking despondent after his latest defeat. 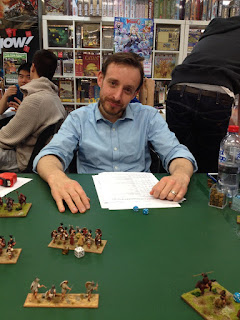 I'm really keen to play a full game of Impetus, so please add encouraging messages to get him to paint the rest of his army. 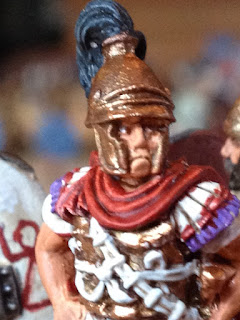