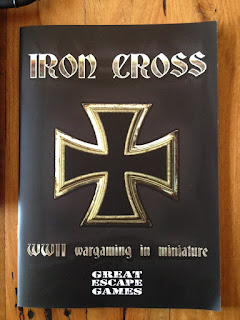 Iron Cross is the new-ish set of WWII rules from Great Escape Games, written by Stuart McCorquodale and Darryl Morton, with Mark Mainwaring. It aims to provide a fun, fast-play set of rules to allow players to get lots of tanks and infantry on the table. Thanks to Ian and John at War & Peace Games I was able to get hold of a copy and try them out at our Odin's Night gaming group. Given that I am a big fan of the Battle Group rules from Iron Fist Publishing, I wasn't sure how I would feel about Iron Cross. The rules set out to give a very different game. Battle Group is very gritty, simulating such detail as ammunition supply, communications and different types of munitions, with supplements giving very different flavour for different theatres and periods of the war. Exactly the sort of thing that appeals to me a lot. In contrast, Iron Cross has no rules for artillery or air strikes, very abstract rules for things like mortar observers, no battlefield engineering and so on.

The first point to make therefore is that Iron Cross is setting out to fill a particular niche - it is not competing with rules like Battle Group. The rules are really aimed at company to battalion level games, so it isn't competing with Bolt Action or Chain of Command either. This is a game to play with mates where you want a fun evening with lots of toys on the table and don't want to think too hard about fine details. Despite being light on detail though, the game still manages to present a lot of good command decision making, creating a tense set of challenges as each commander tries to marshal their finite ability to exercise control over their forces. But more on that shortly. 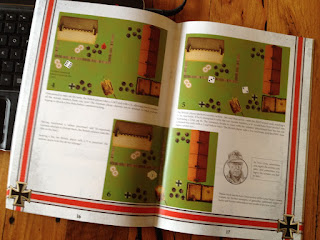 For anyone used to other Great Escape Games like Dead Man's Hand, the rulebook format will look familiar. That is to say, this is a beautifully produced set of rules that explains its core concepts very well through clear diagrams and the device of having a couple of 'narrators' periodically appear throughout the text to give advice and clarify points. There is plenty of eye candy as well, with good photographs of mainly 28mm figures and terrain.

The core rulebook contains representative army lists for Germans, Brits, US and Soviets in 1944-5, with more appearing already as free downloads at the Great Escape site. The army lists give a basic overview of major vehicles and guns, although there are some simplifications for the rivet counters among us. For example, the rules give the same weapons stats for a Hetzer as a Jagdpanzer IV, without differentiating a Jagdpanzer IV L/70. It also seems odd to give stats for the (rare) Churchill VI and VII, but not the Churchill IV, which was such a workhorse in North-West Europe in 1944-5. But these are quibbles for the more OCD among us.

So what of the real meat of the game? Iron Cross is built around each general having a series of Command Tokens - one for each unit and two extra for the commander. At the start of each turn the rival commanders gather the tokens available to them, and a simple die roll identifies the active player. The active player can then start to 'spend' his or her command tokens to activate units, with each activation allowing two actions, eg moving and shooting or shooting and moving (but not shooting twice, unlike Battle Group). Tokens can be spent to activate the same unit again, but after the first 'free' activation subsequent attempts require a die roll, so it becomes progressively harder to activate the same unit.

The most engaging aspect of the game is that at any point your opponent can interrupt your turn to activate a unit of their own. They do so by spending a command token, but also need to roll a die, even for the first time a unit reacts to the active player. This is a nice rule, as it presents the non-active player with the command dilemma of whether to react, with the chance of wasting a command token, or to try to hold on to their tokens for when they become the active player. There is also a one in six chance that the reactive player will steal initiative from the active commander when interrupting their action. Initiative during a term can therefore switch between the players a number of times, the turn only ending when all tokens are spent. 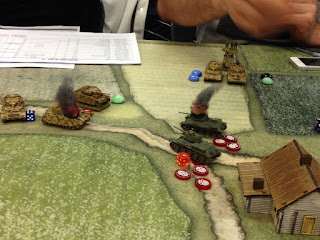 This mechanism of contested activations is the core of Iron Cross, and it makes for a tense game of decision making, with a great 'narrative' feel. For example, picture the Panzer IV sitting in the street of a French town. It knows there is a British Cromwell around the corner, so the commander pays a command token to move and shoot. However, the British commander interrupts the activation by paying a command token and successfully rolling dice to activate the Cromwell, seeking also to move and shoot. It succeeds in activating, the Cromwell reversing behind some rubble to give it cover from the tank it can hear clanking around the corner. The Panzer IV now takes both its actions, moving around the corner and firing on the Cromwell. However, thanks to the cover the Cromwell gained, the Panzer IV misses. The Cromwell then takes the second action of its activation, firing on the Panzer IV and blowing off its track.

Damage in Iron Cross can be sudden and dramatic, for example a hit may cause a tank to brew up. More usual, however, on vehicle and infantry targets is a steady degrading through the accumulation or morale counters. These further restrict the ability of units to activate, and if unchecked by spending command tokens to try to boost morale can result in the unit routing, or the crew abandoning its vehicle.

There is lots to like about Iron Cross. My only real criticism is that despite the lovely production of Iron Cross, at times I felt the rules needed to be spelled out more carefully. Some aspects of the rules felt as though they were the result of being exhaustively playtested by a small group, rather than being tested for clarity on people uninvolved in the game's development. This was particularly the case with the rules dealing with transporting infantry in vehicles. Page 20 of the rulebook deals with this, explaining that a transport vehicle is considered to be part of the infantry unit they come with, and thus does not generate command tokens. In a sense then, it seems that transport vehicles should almost be considered as a sort of movement bonus, rather than a unit in their own right. However, the rules go on to say that they require a command token to be activated separately from their infantry unit once they have dropped them off, either to move or to fire. Alternatively, it states that the transport unit can be moved (but perhaps not fire?) when its parent unit is activated, instead of the infantry unit itself. This sort of makes sense, suggesting that the commander can either activate the transport unit or the infantry squad to move their transport, depending on which is going to be easier to activate. However, I think the authors could have pinned this section of the rules down more, especially since infantry support working with armour is the core of the game. Judging by a couple of threads on the Great Escape Games forum, I don't seem to be alone in finding the rules for transported infantry confusing, with another issue being how to allocate morale hits to the transport unit and the infantry they are carrying if the vehicle is hit. The intention of the authors is clear and salutary; they are trying to avoid the situation sometimes found in other games (cough, FOW, cough) where transport vehicles are used as quasi-light tanks or even just shields in completely ahistorical ways. However, I'm not entirely comfortable with the solution of leaving, say, an Opel Blitz truck equivalent to a SdkFz 251 in everything except armoured protection, the SdkFz being listed as unarmed. The authors have been very responsive and helpful with queries on the GEG forum, but have tended to explain the way they have handled this aspect of the rules by referring to their own games, rather than being able to give a clear and universal interpretation.

Clarifying the way infantry interacts with armour is essential, as the authors have cleverly made infantry support essential to the way tanks operate in the game. In particular, I really like the way that unsupported armour in the presence of enemy infantry are significantly handicapped, reflecting the caution of their crews travelling 'buttoned up' without their own infantry operating in support. 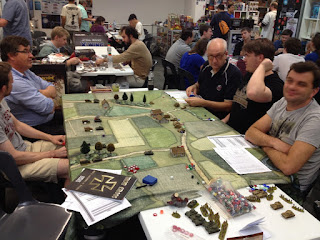 The Odinians put Iron Cross to the test

Despite these minor reservations, the one game of Iron Cross I have played so far was thoroughly enjoyable. One thing to note about the game is that it does lend itself to multi-player games really well, and we tried it out with three players on each side. We played a meeting engagement scenario set during the Battle of Kursk, with a company of T-34s with a platoon of infantry in support coming up against a platoon of Panzergrenadiers with Panzer IIIs and IVs. Mainly due to the way I set out the terrain, the game turned into something of a slugfest, and my force (the Soviets)had the most incredible string of bad luck I think I've ever experienced. Nevertheless (and despite some confusion over transported infantry) the game played exactly as promised, giving a highly interactive and exciting evening of mayhem. 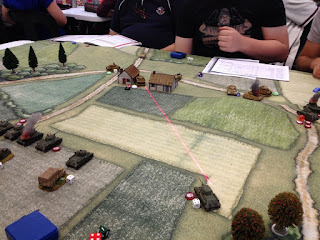 Showing off with a laser LOS marker from Army Painter

Given the time and similarly OCD people to play with, I would choose to play Battle Group over Iron Cross any time. However, that is just a reflection of my own preferences, and no criticism of the game itself. I'm looking forward to trying out Iron Cross at the school club, where I think it will work very well, and I'm particularly keen to run some multi-player games. I would certainly love to play it again, and I look forward to new expansions coming out. The first promised supplement will cover the dessert war, and I think Iron Cross will be well suited to gaming that theatre. Go and buy it: It's a good set of rules.

Posted by Dux Homunculorum at 4:14 AM 9 comments: