Seljuks on D minus 6

A quick update. Just spent the whole weekend painting. Not fun painting, but painting with rollers and big brushes ready for the big relocation of the clan to our new house next Monday. I've been chipping away at some Seljuk cavalry over the past week though, and just got them finished, so here are a couple of snaps. These are Perry figures, and lovely they are, although the horses can be a little flimsy. 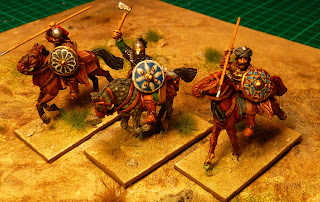 Not sure how much I'll be able to update the blog over the next couple of weeks as we do the hideous move and organise internet at the new castle. For now, be well. Dux out.
Posted by Dux Homunculorum at 4:22 AM 5 comments:

We are really getting into the swing of things at the school club with BGK. The boys have been steadily assembling and painting the models that were generously donated by Will at Plastic Soldier Company, sometimes with hilarious results. My only criticism of PSC kits is that their instructions can be hard to follow for people who don't already have a good mental picture of what the finished model should look like, so the boys have occasionally produced things like Hanomags with the track sections on upside down (!) or the backs to the interior seats used as the exterior stowage boxes. Thank goodness for the slow drying time of plastic glue.

Meanwhile, a couple of the boys who know the rules well have been running little games on their own initiative with just a couple of squads of infantry and a vehicle or two to help the others get to know the rules. Last week one of these 'Experten' and I had a great 350 point demo game after school in the library, that ended up attracting an initially sarcastic and ultimately fascinated little audience who without understanding the rules were still swept along by the drama they saw unfolding in front of them on the tabletop.

350 points being the largest size of a squad-level game, I decided to bring the minimum number of infantry along with my Panzer battlegroup so that I could try out my shiny new Panther. My force was thus very armour heavy, but brittle, with a senior commander in a Panzer IV H, a squadron of Pz IV Hs, a SdKfz 231 recce half track, a Hanomag with a squad of Panzergrenadiers, a supply truck and of course a Panther. My opponent (let's call him Rostmirov) had a more balanced and very resilient force of T34s, a platoon of infantry, a Zis 2 A/T gun, a field hospital and a couple of scout squads and a sniper.

We were playing the basic meeting engagement scenario (Attack/Defence), so Rostmirov won the recce battle and had the advantage in set up. I tended to be luckier with my die rolls getting my units onto the table, so had the advantage over Rostmirov's more piecemeal attack.

It was great to see in this game that many of the rules are now feeling far more intuitive. We were both mainly using either area fire or aimed fire with AP, and the process of shooting and morale checks etc flowed very smoothly. After my experience in the last game against Daniel, I was far more willing this time to try pinning enemy units with area fire, and made much better use of reserve fire. Rostmirov allowed himself to get drawn into a long-range firefight, in which my tanks had the advantage. The Panther in particular was devastating on the rare occasion it managed to get a clean shot at a T34. Rostmirov's Zis 2 gun played no part in the battle as I was able to keep it pinned. 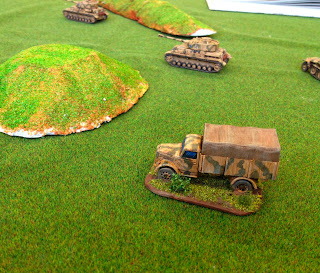 There were two highlights to the game. In the first, Rostmirov drew a damage counter that had the random event of causing one of my infantry squads to run out of ammo. I only had one squad, which at the time was traversing the battlefield in its halftrack and hadn't fired a shot. We assumed the conversation in the halftrack went something like this:

Feldwebel: Right, Kameraden, we are getting close to the Bolshevik lines, so Hans will distribute the ammunition.
Hans: Sorry, what?
Feldwebel: Hand around the ammunition.
Hans: I told Wolfgang to get it.
Wolfgang: Bugger off - you did not!
Hans: I bloody did! Just before we got in the Hanomag I asked you to grab those ammo boxes.
Wolfgang: Oooh you liar!
Feldwebel: So just to clarify, nobody brought the ammo?
(General silence)
Feldwebel: Wunderbar.
(and so on - the squad quits the field to find some ammo, recriminations continuing). 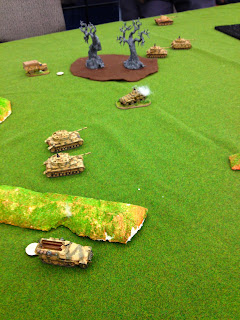 The other highlight was a sort of Mexican standoff that occurred with both of us having a string of tanks on reserve fire. When Rostmirov activated one to interrupt one of my tanks firing, I activated another to fire at him, which he interrupted and so on. The upshot, thanks to superior German tank guns and some luck, was three burning T34s. When Rostmirov threw in the towel, he had lost all his antitank capability and I had only lost my armoured car (and that squad that wandered off the battlefield). However, thanks to the great resilience of the Russians we were actually equal as far as the Battle Rating was concerned, both being on 10 BR. 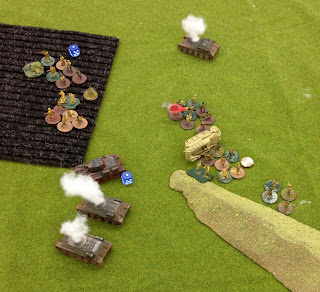 This was a thoroughly enjoyable game, fought to completion in exactly 2 hours and demonstrating just how well BGK can work at school. In general, we will play 250 point games in the time available after school. As is obvious from the photos, the next priority is to work on terrain boards!
Posted by Dux Homunculorum at 5:49 PM 13 comments:

There are lots of things going on in the Duchy at the moment. In two weeks the Duchess and I will gather our retinue and move to a different castle, so we are frantically packing, cleaning and spending money like drunken sailors in a brothel. One fantastic hobby related thing about the move is this: 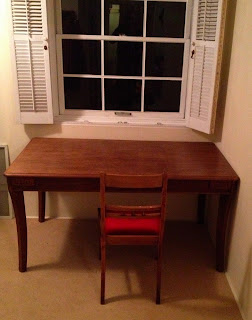 It may just look like a table to you, but you are looking at my dedicated hobby space in the new house. Yep, I will no longer have to set up my gear on the dining room table every night and then clear it away again. Half the room at the front of the house is going to be the Duchess' study, and the other half my Man Cave, or if not quite a complete cave, at least a pothole or overhanging rock. There will be a DMZ down the middle of the room, and the Duchess already understands that if there aren't' actually rats scampering around in my half of the room she can't comment on the hobby squalor I plan to generate. 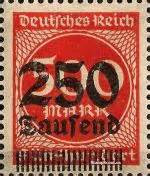 Meanwhile, my blog has just hit 250,000 page views! Thank you to everyone who visits my humble blog and comments on posts. It is great to have such a strong sense of nerdy community. This milestone of course warrants some sort of Tamsin-esque incredible giveaway, but I'll have to wait a few weeks until the move is all completed. However, as Neil Shuck on Meeples and Miniatures would say, 'watch this space'.
Posted by Dux Homunculorum at 6:26 AM 19 comments:

This week I have been mostly....

Churning out some Soviet trucks. These are the little 15mm Zis 5 trucks from Zvezda. I'm loving these little kits - the engineering on them is great, and while lacking a bit of detail they are fast to put together and cheap. I've spruced a couple up with some cargo from the Universal Stowage pack put out by Skytrex. 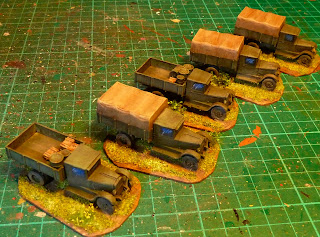 Although German production totals can't compete with the Soviets, I also finished a Zvezda Opel Blitz, and more excitingly, a Panther from Plastic Soldier Company. More lovely kits! My only criticism of the PSC Panther is the instructions, which I think give slightly misleading guidance about the differences between the Panther marks, eg giving the impression that side armour skirts weren't found on Ausf. Ds. 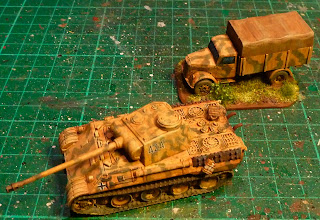 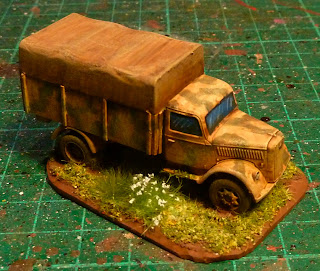 I think I should have included smoke dischargers on a Panther from Kursk, and I'm sure the markings are wrong, but I do like the look of this big kitty. I'm looking forward to seeing it instantly break down in my next game. 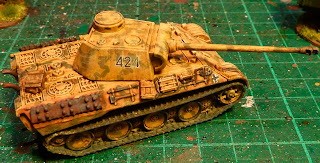 Posted by Dux Homunculorum at 5:42 AM 8 comments: