Victory Without Quarter with Millsy and Paul

Had a great gaming day today thanks to Millsy, who invited Man Cave Paul and I to his lair for a game of Victory Without Quarter. I've been wanting to have a go at these (free!) ECW rules from Clarence Harrison from Quindia Studios for about three years, and it was a real pleasure to try them out with Millsy's beautifully painted figures. 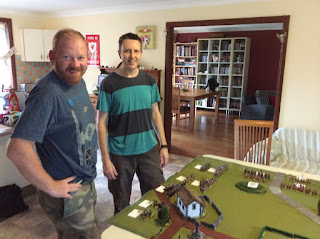 Millsy had come up with a great scenario - the Battle of Curmudgeon Moor. As the Parliamentarian commander, my task was to break through a Royalist defensive position to gain control of an important road and get some of my forces off the table. This was the terrifying sight facing my men. 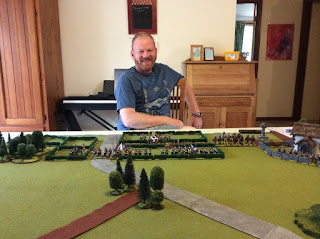 The commanded shot occupying the churchyard facing my right flank caused me a lot of problems in the battle, proving to be a tough nut to crack. The artillery also caused me headaches, routing my best unit of horse. 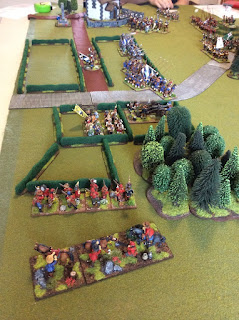 On my left flank, I managed to get a unit of dragoons into a great position, and there they stayed through the remainder of the battle thanks to the stalwart defence of a rabble of Clubmen.

Towards the end of the fight things started looking up, particularly when I managed to rout a regiment of Scots foot and tear a gap in the Royalist line. Paul took this with his customary dignified reserve. 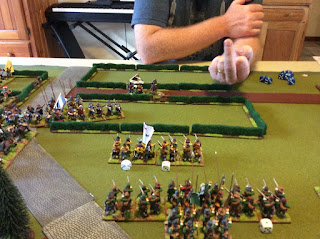 Sadly, this was not enough. As night came on, the forces of Parliament were in a winning position, but hadn't managed to break through the Royalist lines in the time they had available to them, the Royalist artillery, Clubmen and Commanded Foot defending the church thwarting my plans. 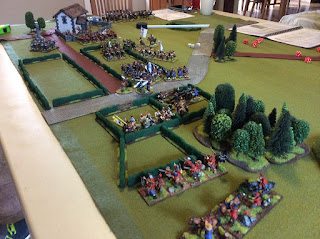 I really enjoyed Victory Without Quarter - a simple set of rules that certainly evoked the feel of C17th warfare. More importantly, a great day with some lovely chaps. Thanks Millsy!
Posted by Dux Homunculorum at 4:01 AM 13 comments: