This is an army I finished painting about two years ago, but only just got around to painting the bases. This one was heavily inspired by a Dacian army painted by Reinhard Sabel that features on the Fanaticus website. All figures are 1/72 scale plastics. 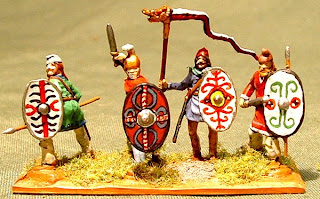 Here is the command element. All the figures are made by HaT Industrie, with the general actually coming from their Carthaginian Command set.

Six elements of Warband. Most
are HaT Dacians, although there are a couple of clubmen lurking in the back row from their Roman Auxiliaries set. 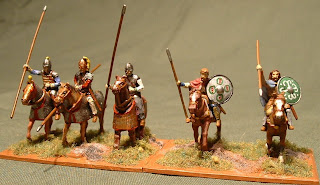 Sarmatian allied cavalry on the left (Knights), from the HaT set of Roman Clibanarii. From memory one of the horses is actually Carthaginian, although with a different head. The Light Horse are HaT Gothic cavalry.
Posted by Dux Homunculorum at 4:32 AM 1 comment: