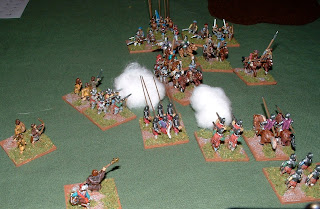 Met up last night with Paul the Galloglaigh to try out the Irregular Wars rules. Paul fielded a Border Reiver army, intent on plunder, while I had the Spanish Expeditionary Force. The beer war Dark Lord, a great wargaming ale with Black Tom Fairfax on the label.
I started strongly, charging a company of border horse with my pikes. Then everything went wrong. I allowed my companies of shot to get involved in melees, and by the end Paul ripped a whole through my centre and surrounded my pikes and one company of cavalry. Disaster! 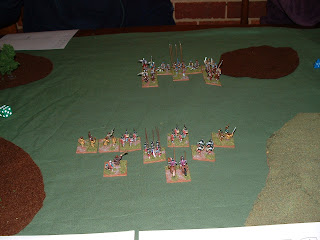 The rules were fun and simple, although I think there were a couple of melee rules we got wrong. We'll definitely be playing it again. 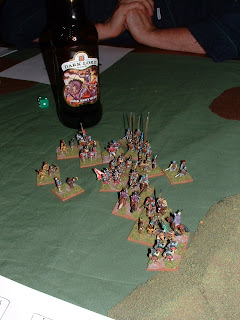 Posted by Dux Homunculorum at 3:51 AM 7 comments:

Here's a couple more Covenanter cavalry standards (cornets) that might be of use to someone.
First up - A cornet of Lord Mauchline's regiment, captured at Dunbar in 1650: 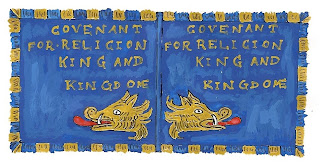 ...and this one was surrendered on 25 August 1648 at Uttoxeter. It belonged to one of the troops of the Duke of Hamilton's life guard of horse. The slogan means 'give unto Caesar', referring to Matthew 22:21. 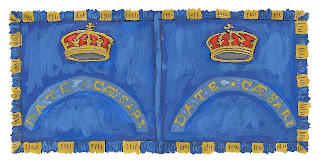 Enjoy!
Posted by Dux Homunculorum at 3:02 AM 2 comments: 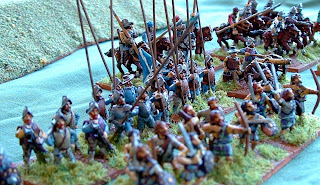 I have to say, painting my first 1/72 figures in years didn't make me like 1/72 any less. The WRM border reivers in particular were a bit of a disappointment, with some of the figures being incredibly flat. At some stage I'll make some armies for Irregular Wars in God's own scale of 1/72....
Posted by Dux Homunculorum at 4:18 AM No comments: